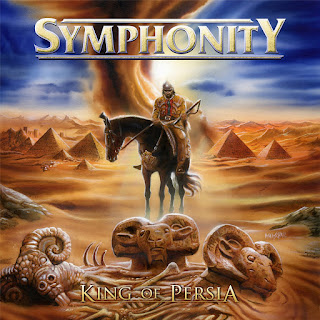 After 8 long years, Symphonity has finally returned with a new record. This time around, they have enlisted the help of Herbie Langhans (Sinbreed) on vocals, which means this album features two singers, as Olaf Hayer is still along for the ride. It’s clear why Herbie was brought in; the song he provided guest vocals for on the debut was perhaps the band’s best work, in large part because of the brilliant way the two singers traded lines. On “King of Persia”, however, something is off from the start. Two of these songs are duets, but the remaining 7 non-instrumental tracks are split between 3 for Olaf and 4 for Herbie. And two of Olaf’s songs are ballads (one of which runs less than 3 minutes). This already makes “King of Persia” a slight disappointment; not because Olaf is a better singer, but rather because it has been 6 years since his last appearance, while Herbie is everywhere these days. There’s nothing wrong with either singer’s performance on this record, but the split between them is definitely a head-scratcher.

Putting that aside, “King of Persia” delivers in a huge way. The monolithic title track that opens the record features some of the band’s heaviest riffs, and shows why Symphonity is at their best with both singers working together. Olaf provides the more melodic voice of the two, with plenty of unique character in his tone, while Herbie’s vocals are much gruffer and more aggressive. The track is also overflowing with unusual motifs and melodies that are designed to complement the cover art and theme of the record.

The album really doesn’t let up from this point: both “The Choice”, “Flying”, and “Children of the Light” (all Herbie songs) present some of the band’s catchiest choruses to date, while still offering thundering, galloping rhythms and dazzling lead playing. Despite the band’s affinity for keyboards and symphonies, the music is consistently heavy. For fans of power metal that aren’t big on the lighter side of the subgenre, Symphonity will still manage to keep you interested. The sole Olaf power metal song, “In The Name of God” is consistent with these other three tracks in terms of quality, but takes a slightly different approach given the contrasting talents of the singers. This song has numerous melodies that will please Dionysus fans, and is one of the most authentic sounding tributes to Olaf’s previous band.


The remaining tracks don’t manage to be quite as memorable. They don’t sound particularly different from anything else Symphonity does on this record, but they fail to be as catchy. “A Farewell That Wasn’t Meant To Be” is nevertheless an enjoyable ballad, especially because it lets Olaf shine via a heart-wrenching performance. Though this review as a whole might seem harsh, “King of Persia” is actually a really good album. The best tracks can stand up against almost anything else that has been released in 2016, and there’s nothing that is outright bad on this record. Herbie is an incredible singer, which is why he is showing up everywhere this year (including Avantasia and Sinbreed), but Olaf’s appearances are far rarer. Hopefully Symphonity can better utilize him in the future, or at the very least, he steps in for another band because the world needs more Olaf Hayer! Symphonity is obviously about much more than the singers, (particularly given that this band is from the Czech Republic, yet both of their singers are German), but there's very litte to complain about musically. Overall, "King of Persia", is definitely among the stronger power metal records this year.

Highlights
"The Choice"
"In The Name of God"
"Flying"

at 9:43 AM
Email ThisBlogThis!Share to TwitterShare to FacebookShare to Pinterest
Labels: 2016, Czech Republic, King of Persia, Symphonity