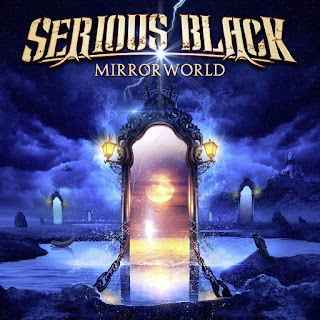 “Mirrorworld” is album number two for the power metal supergroup Serious Black. Despite featuring a slight lineup change, the band still retains uber popular vocalist Urban breed. Before reviewing this record, however, it’s worth pointing out that for the second time in as many releases, Serious Black has put out a somewhat incomplete record. The debut wasn’t as bad, but the regular edition of “Mirrorworld” features 9 tracks, while the limited edition features 16 (1 of which is an acoustic version of a song from the debut). As a result, I’ll be reviewing the limited edition, but no release I’ve ever come across has baffled me more than this one.

Regardless of which version you have, Serious Black wastes little time showing you that they can play seriously aggressive and dazzling power metal with the opening tracks “As Long As I’m Alive” and “Castor Skies”. The former shows Urban breed delivery a litany of lyrics that are incredibly complex (and likely a disaster to memorize!). Nevertheless, his smooth, character-filled voice makes this track effective. The latter of the aforementioned songs will appeal to all of the shred fanatics out there; the main riffs shows some harmonized keyboard and guitar runs that would make Timo Tolkki and Jens Johansson proud. These two songs are immediate highlights, and were unsurprisingly the two singles from the album.

And then there’s the rest of the album. Make no mistake, “Mirrorworld” is an enjoyable record from start to finish, but the two pre-release songs really aren’t all that representative of what it sounds like (aside from the also energized “You’re Not Alone”). Similar to the band’s debut, this album features a lot of melodic, hard rocking songs that have more in common with the more stripped-down power metal sounds a lot of bands have employed in recent years than the speedy, virtuosic sounds that dominated the late 90s and early 00s. Songs like “Dying Hearts”, “Mirrorworld”, and especially “Heartbroken Soul” are just really fun songs, even if they offer little in the way of innovation.

As the record soldiers on, it tends to suffer the same fate as the debut: slight fatigue due to a bloated runtime. If you’ve got the limited edition of both albums, there are 30 songs combined on records released in consecutive years. Serious Black may be composed of many great songwriters and musicians, but there is still the occasional filler in there. On “Mirrorworld”, this comes in the form of “This Machine Is Broken” and the semi-ballad “Goodbye My Angel” (which is as sappy as it sounds). Both of these songs have their moments, but feel less inspired than some of the earlier tracks.

Fortunately, there is a highlight towards the end of the record: “Hello Moon”. Once again, this is a classic feelgood rocking tune that is undeniably catchy. As great as Urban breed has been with some of his more traditional power metal bands, his voice is an excellent fit for Serious Black’s tamer, more relaxing sound as well, and “Hello Moon” is one of many tracks that displays this.


On the whole, “Mirrorworld” is on par with the band’s debut. Ultimately, your preference is likely to come down to which album has more songs that click with you because sonically, they’re quite similar. Both albums feature an overload of tracks, and most of these songs are winners. I still can’t help but feel that both the release of the two most obvious power metal songs and the fact that the regular edition only contains half of the record is disingenuous. Whether these decisions came from the band or the label, they were both bad ones, but it doesn’t change the fact that “Mirrorworld” contains a potent set of tunes that all power metal fans would be wise to hear.