Unearthed Elf – Into The Catacomb Abyss 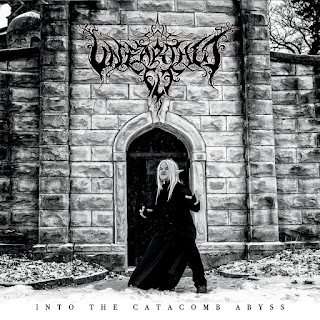 This album cover might scream black metal, but Unearthed Elf’s “Into The Catacomb Abyss” is planted firmly in the realm of doom metal. Their approach is largely traditional in nature, recalling many classic heavy metal bands, but with a darker, more decrepit tone. Every moment on this record truly sounds like you are trapped within a catacomb, hoping for escape. Subtly placed keyboards conjure the appropriate atmosphere, but Unearthed Elf lets the riffs and vocals do most of the heavy lifting.

This project was created and executed by one person, which is absolutely incredible, as it sounds as professional as anything you’d pick up from the major metal labels. Of course, it’s not as though this is the most technically complex music, but there’s not a single moment on this album that screams amateur. Often times, the biggest area of weakness for solo projects is the singing, but that is not the case for Unearthed Elf. Keith D’s vocals are melodic, soothing, and perfectly in tune with the rest of the music at all times. The easiest point of comparison would be to Ghost’s singer, as they both go for that spooky, Halloween-esque feel.

Doom metal is a really tough sell for me. It intrinsically feels unenergetic and boring, but that isn’t true for “Into The Catacomb Abyss”. It is slow most of the time, but there are a lot of riffs that are more than simply crushing chords, which help to keep things interesting. There still are plenty of moments where Keith moves from chord to chord (“Eternal Night” having one such example), but no song is totally devoid of worthwhile moments. The aforementioned track climaxes with an epic guitar solo that caps off a nearly 7-minute journey.

“Into The Catacomb Abyss” isn’t a record I will reach for often, but that is because of my own aversion to doom metal. It is easy to see this topping numerous year-end lists for doom metal fans, as this album has even made a believer out of me. It could probably benefit from being a little shorter, but again, that’s a lack of patience on my part rather than a comment about the quality of the songwriting or the riffs. All in all, “Into The Catacomb Abyss” is a top tier release for doom metal!

at 9:24 AM
Email ThisBlogThis!Share to TwitterShare to FacebookShare to Pinterest
Labels: 2016, Doom Metal, Into the Catacomb Abyss, Unearthed Elf, USA