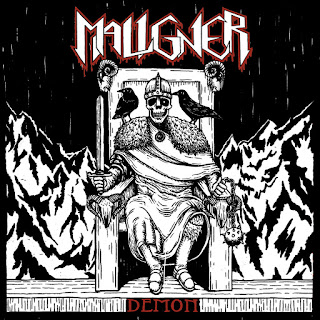 “Demon” is the first demo from Sweden’s Maligner, and is set to be released on both Unspeakable Axe Records (CD) and Blood Harvest Records (tape) later this year. The cover art depicts the sound of this release well: it is a barbaric, thrashing effort that stretches into death metal at times. Though not as much of a constant speed fest as bands like Hypnosia or Dekapitator, those groups are solid approximations of Maligner’s sound. From start to finish, “Demon” is filled with songs that feel spastic and out of control, yet remain very tight and technically proficient. The band has no qualms about letting their shredder loose, as he dominates the record with wild fretwork that pays homage to some of Kreator’s earlier work (though slightly more in key).

Despite leaning to the more aggressive side of thrash, Maligner can get more traditional at times. “Juggernaut” opens with a riff that is just a little too close to “Into the Pit” for comfort, but it shows the band’s ability to groove. Instead of being a one trick speed pony, Maligner can mix things up when needed, offering a variety of tempos, but never getting boring by abandoning faster moments altogether. In fact, tracks like “Shattered Reality” and “Adrenaline Rush” show the band pushing themselves to the limit and hitting absurd velocities.


My typical complaint of these types of releases is that there is little impactful songwriting, but that is absolutely not the case on “Demon”. The 1-2 punch of “The Die is Cast” and “Juggernaut” that open the record will remain firmly planted in your mind when this demo finishes, and the following three tracks are no slouch either. The band’s songwriting is aided by the fact that their vocalist is easy to understand, despite having the perfect blend of a vicious death/thrash voice. Lines like “killing people, my occupation” from “Immortalized” hit hard because of the potency of Maligno raspy voice (this whole track is littered with brilliantly hateful lines). The end result is a memorable product that is worth going back to again and again. Ultimately, Maligner’s “Demon” is a masterwork of death/thrash that is sure to appeal to fans of Kreator, Ripper, and numerous others.

Be sure to check out Maligner on Bandcamp!

Highlights
"The Die Is Cast"
"Immortalized"