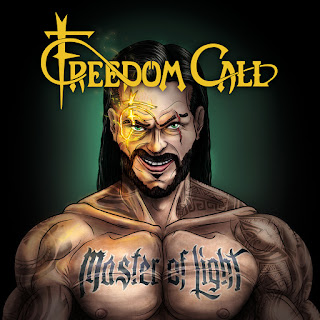 After just 2 years, the consistently prolific Freedom Call has returned with another record. Upon its unveiling, the cover art of “Master of Light” definitely stood out amongst the rest of the band’s artwork. At the end of the day, the focus should always be on the music, and make no mistake: “Master of Light” is very consistent with Freedom Call’s output to date. This album continues along the path set by “Beyond”; in other words, it is more similar to the band’s earlier work than their mid-era material (though the change in the band’s sound has always been severely overstated, and some of their best work even came between 2005-2012).

The band chose the single from this album wisely, as “Hammer of the Gods” is far and away the strongest track. It isn’t a high-speed blazer, but instead a somewhat upbeat anthemic track, complete with an easy to sing along to chorus. This song can stand up against anything else in the band’s catalogue. Unfortunately, the same can’t quite be said for the rest of the album. There are some unique standouts, like the almost-Celtic approach of “A World Beyond”, the absurdly heavy “Ghost Ballet”, and the classic excessively happy closing song “High Up”. Despite that, however, this feels like a very standard Freedom Call album. Of course, the worst Freedom Call record is better than most other band’s best work, but there aren’t even a handful of songs on this album that I would regularly revisit. The melodies are predictable, but the real problem is that they just aren’t overly memorable.


That doesn’t mean fans will be disappointed. If you need a dose of overly cheesy power metal, driven by Chris Bay’s fantastical vocals and mystic themes, “Master of Light” gets the job done. The song that kicks off the record, “Metal Is For Everyone”, is a perfect summation of the band’s attitude and general sound. Freedom Call is among the most accessible of metal bands due to their positive attitudes and fun, light-hearted music. And that’s really why you can’t even be disappointed with this: the band gave it a really good effort and the outcome is true to their sound. It just isn’t as enjoyable as what they’ve done in the past. Nevertheless, this album is an essential purchase for fans, and I eagerly await my pre-ordered copy in the mail despite it not living up to its predecessor!

Highlights
"Hammer of The Gods"
"A World Beyond"
"Master of Light"