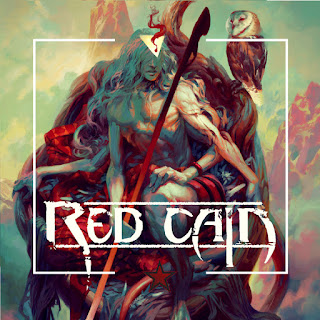 Red Cain comes from Calgary, and is a 5-piece band that is about to release their debut self-titled EP. Throwing the band into a particular subgenre is difficult because they incorporate a wide range of sounds and styles, but the base sound would best be characterized as slightly progressive power metal in the vein of Symphony X or Kamelot. In other words, Red Cain plays very melodic music with the ability to be very heavy. There is also an element of more modern rock to their sound. A lot of this comes from the vocalist, who is not a high-pitched wailer, but instead uses more of an alternative rock sound (reminding one of A Perfect Circle at times). This doesn’t sound like a convincing combination, but it works surprisingly well.


As though to push the boundaries even further, Red Cain actually utilizes some electronic elements at times. There are a couple of full-on electronic breaks (the most obvious being around the 4 minute mark of “Guillotine”), but in general, they tend to be a little subtler in how they add these sounds to their music. Fortunately, Red Cain is excellent at making transitions between different styles seamless, so this release does not feel like a strange mishmash of sounds. Despite this, the songwriting doesn’t feel overly memorable, which is my sole criticism of the EP. Admittedly, I’m not the most open-minded listener, but the leanings towards alternative rock or electronic music don’t really deter me. Instead, it’s the lack of sheer catchiness or memorable moments that are the release’s only weakness. Nevertheless, “Red Cain” is worth checking out if you’re into more progressive music or are just looking for something different from the norm.