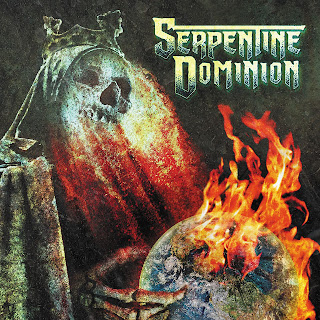 Serpentine Dominion is a new project featuring an incredibly unlikely trio of metal stars: Corpsegrinder (Cannibal Corpse), Adam Dutkiewicz (Killswitch Engage), and Shannon Lucas (The Black Dahlia Murder). On the surface, it’s a tough sell for those of us who don’t like metalcore, but this album leans much more towards the death metal side of things. A lot of these metalcore characters are actually huge fans of more classic styles of metal, and Adam’s songwriting makes that very clear. “Serpentine Dominion” is largely a death metal record, with the occasional nod to metalcore. In fact, it’s impressive how well the band has captured Cannibal Corpse’s sound at times, and that isn’t just because Corpsegrinder is singing. A lot of the chugging riffing is reminiscent of more modern Cannibal Corpse, but even the chaotic, wild soloing is comparable. There are also some moments that conjure a creepier atmosphere, similar to what Cannibal Corpse did on tracks like “Followed Home Then Killed” (“Divide, Conquer, Burn, and Destroy”, and “Sovereign Hate” come to mind).

The caveat is that there are a few songs with melodic metalcore singing. They by no means dominate any particular track (and some songs are devoid of them completely), but they’re definitely there. To his credit, Adam is probably a better singer than most vocalists in the style, as he avoids sounding overly whiny. Additionally, his vocals are typically overlaid with Corpsegrinder’s growls, so it isn’t as though they’re the main focus of the music. The only other complaint that could be laid upon this album is that it is very one-dimensional. Aside from the clean vocal sections, the album either has a constant chugging pace, or a jackhammering one. Both are good, but the result is that much of the album sounds identical. The only reason this isn’t overly problematic is because the record runs for less than 27 minutes, and that includes a combined 4 minutes for the appropriately titled “Intro” and “Prelude”. This means that even if things do get a little repetitive, it really isn’t enough to ruin the album.

The only element that hasn’t been covered yet is the drumming of Shannon Lucas. Unsurprisingly, he is beyond competent. One of the major complaints about Cannibal Corpse’s music was always Paul’s more simplistic drumming, and while he has actually stepped up his game on recent records, “Serpentine Dominion” is likely what Cannibal Corpse would sound like with a Steve Asheim-type drummer. There is plenty of blasting, and almost mechanical precision. The album has plenty of variety from a drum perspective, so it isn’t just non-stop blast beats.


“Serpentine Dominion” could have been a disaster, but the end result is very satisfying for fans of death metal. You have to respect a band that combined two almost polar opposite styles (at least in terms of fanbase) and made it work. The metalcore aspects of this release obviously aren’t the best part, but they do make the record distinct from the hundreds of faceless death metal albums that come out, and they’re executed far better than one would probably expect. For these reasons, “Serpentine Dominion” is a worthy purchase!

Highlights
"The Vengeance In Me"
"Divide, Conquer, Burn, and Destroy"
"Jagged Cross Legions"