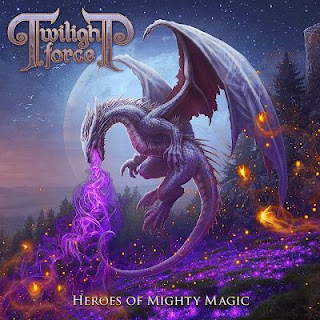 One look at the album cover for Twilight Force’s “Heroes of Mighty Magic” should tell you everything you need to know about this band. If you guessed that they’re essentially a Rhapsody clone with the occasional unique moment, you certainly would have been right if you were talking about their debut record, “Tales of Ancient Prophecies”. To take it a step further, Twilight Force’s first album is not just a crowning achievement for power metal in terms of great songwriting, but even better than any album Rhapsody has ever released.

This undoubtedly creates astronomical expectations that the band could never meet with their follow-up. The more concerning trend, however, is the frolicking seen in the crowd at the band’s concerts, the extended lore and mythology surrounding the band’s members (“characters” might be a more accurate term), and the general desire to become more grandiose and over the top than ever. “Heroes of Mighty Magic” is the result of Twilight Force buying into their own hype. No longer content with writing good songs, the band set out to make the most ridiculous album ever created. And to their credit, they succeeded. If you’re coming into this record as a fan of the band already, you’re going to be disappointed with the first listen. I certainly was.

This is because “Heroes of Mighty Magic” simply doesn’t have anything as immediately good as most of the last record. The closest contender is “To The Stars”, which is the song most similar to the band’s old work. It is the fastest song on the record, and makes use of minimal other frustrating sound effects (more on this later). But the other reason this album will cause initial disappointment is because it is a major grower. Aside from the aforementioned “To The Stars”, “Riders of the Dawn” stands out as the only other first-time highlight. This track is the most energetic; all of the songs are fast, but this song feels genuinely exciting. Chrileon’s performance in the chorus is instantly engaging, and will have you singing along quickly.

The remaining songs aren’t quite as obvious. Both “Battle of Arcane Might” and “Powerwind” stand out as highlights, but this is largely because they were released far enough in advance of the album that they have had more time to sink in. They certainly aren’t without their flaws. The latter track in particular displays a disturbing tendency towards using chimes (or some similar instrument) that appears all too often on this record. Indeed, this is the biggest flaw with “Heroes of Mighty Magic”: it is essentially Disney metal.

I don’t mean that the record is too happy and optimistic, but rather that it literally has sections that you could play side-by-side with a Disney movie and likely couldn’t tell the difference. If you were to remove the guitars, which are already hidden in the background of many songs, it would be impossible to tell. The intro to “Guardian of the Seas” and the middle interlude in “There and Back Again” both have no guitars, and it would be absolutely impossible to decipher which is which in a blind test. Everyone loves Disney, but let’s be honest here, good songwriting beats out symphonic soundtracks every time. The band often accomplishes this through the use of frilly sound effects that are totally out of place or overdone. “Rise of A Hero” is the song where Twilight Force most gets carried away; this track prances around aimlessly for a while before a female (or child?) greets the listener with a couple lines of lyrics that have to be pulled from one of Disney’s many musicals. While many of the other songs actually pull off the Disneyisms well, this track is a major failure, and the one truly weak song on the record.

Despite all of the pessimism so far, there’s a lot to like about this album. There are two lengthy songs: “There and Back Again” and the title track. The latter is the more immediate winner. It feels like a true epic, and is a majestic way to finish the record (there are two more songs, but neither is truly a song). Sabaton’s Joakim Broden appears on this track, and while his performance is not as inspiring as it was on the band’s first record, he definitely adds some much needed oomph to an otherwise light record. “There and Back Again” doesn’t have the same grandeur about it, but it does have many of the album’s most intriguing melodies. This track features an appearance from Fabio Lione, but you wouldn’t know it unless you’re really paying attention. Put simply, he sounds like a slightly aged version of Chrileon. Nevertheless, this song sounds more like Rhapsody than any other track on the record, and so that alone makes it a winner. The chorus does remind one of something out of Aladdin, but hey, if you made it far enough into this record to listen to this song, that probably won’t bother you.

In terms of the shorter songs, most of the best tracks have already been discussed above, but “Keepers of Fate” is another song that stands out, for no other reason than having a few catchy melodies. Most songs on this record can boast that claim, but “Keepers of Fate” is a cut above some of the more predictable tracks like “Guardian of the Seas” and “Flight of the Sapphire Dragon”. Surprisingly, the band resisted the temptation to put a ballad on this record, which was a wise decision. The ballad on the debut was enjoyable, but at 70 minutes, this record needs all of the energy it can muster to keep it going, which it certainly achieves for the first 62 minutes.

The most confusing moments of the album come at the end. After the brilliant title track comes “Epilogue”. This song is 6 and a half minutes of narration, without any of the theatrics of Manowar’s “The Warrior’s Prayer” (which was already a painful effort). This should come as no surprise; the first album had a couple of these narrations which were awful, but they were more bearable because they were shorter and broken up across the album. The final track, “Knights of Twilight’s Might”, acts as the band’s national anthem. It would not be out of place being played before any sporting event, but holds absolutely no relevance to power metal or the first 10 tracks on the record. For the sub-2 minutes that it runs, it is ok for a cheap laugh, but is never worth repeating.

The elephant in the room at this point is the production. Each of the three songs that were released before the album came out sounded different from one another. The biggest issue is not so much that the guitars are hidden in the background (they will pop out often enough), but more that there are so many layers of keyboards, symphonics, and other twiddly sound effects that it makes for a very inconsistent result. Some moments have an unbearable amount of glory with incoherent clashing sounds, while others work perfectly. It’s unclear to me if the strange production meshes together better after numerous listens, or if the songs have grown on me enough to overlook it. Either way, this record is going to suck the first time around, and then suck less and less each time until you realize it is a brilliant concoction that has no business working, but somehow does.

Amidst the wild production, the guitars always come to life when there are solos. The shredding on this album is a strange beast. There are the random flares that bands like Pathfinder adore, but there are also a lot of dedicated solo sections. These solos feel somewhat like an exercise in technique though. They consist of sweeping, tapping, and sweep-tapping, but what makes them less compelling is the fact that they’re almost entirely straight 16th-notes. There’s absolutely no variety in terms of speed or technique, and the result is that they all feel common place. The first record was no stranger to ridiculous shredding, but speedy fretwork was interwoven with more memorable leads. “Heroes of Mighty Magic” can make no such claim.


It’s easy to be critical of this record because it isn’t what I wanted. “Tales of Ancient Prophecies” is probably a top-10 power metal album for me, and “Heroes of Mighty Magic” feels like almost an entirely different band. But the reality is that Twilight Force has managed to carve a unique niche within a fairly common sound (for now; there will no doubt be imitators in a few years), and they have done so convincingly. It doesn’t mean that every song on this record is a winner, but if you could cut it down to 9 songs (removing “Rise of a Hero”, “Epilogue”, and “Knights of Twilight’s Might”), you’d have an unstoppable release. Even with its slightly bloated playtime, “Heroes of Mighty Magic” is a stellar album. Give it time, and you will be rewarded!