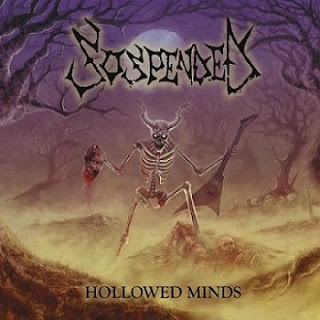 “Hollowed Minds” is the second EP and third release total from 3-piece New Mexico thrashers Suspended. I came across this band while they were opening for Nervosa on their recent North America tour, and though they certainly are not identical bands, there are a lot of similarities. Suspended’s music is fast, aggressive, and leans much more towards death/thrash. They aren’t afraid to throw in tons of tremolo picking and blast beats. Sometimes the riffs feel a little bit disjointed, but they’re always killer.

One of the advantages of being a one-guitar band is that it provides plenty of room for the bass playing to take center stage, and that happens on numerous occasions during “Hollowed Minds”. Of course, the riffs are still the band’s primary focus, but it is always easy to hear creeping bass lines that have something interesting to offer. This is particularly evident during leads and solos, like the one that opens “Escape The Pain”.

All 5 full tracks on this album rage pretty hard, with no one song getting trapped in mid-paced mode. The tracks tend to vary up the tempos consistently, meaning that there is always plenty of speed on every song, but not so much that the entire EP is a blur. Suspended is incredibly skilled at making brooding, atmospheric sections driven by melodic guitars and pulsating rhythms. It is these sections that build up perfectly into wilder thrash riffs. “Beast Within” does this perfectly, as the band unleashes some devastatingly heavy riffs over the course of the first minute and a half, after a great buildup.


One track deserving of special mention is “When The Smoke Clears”, which is overflowing with tapping leads for the first minute of the track. Of course, every song on this EP is worthwhile. Suspended really can’t be faulted for anything here, other than the fact that it does feel a little bit sloppy at times. Nevertheless, “Hollowed Minds” is a solid thrash effort, and while it doesn’t reinvent the wheel, it is recommended for death/thrash enthusiasts.

Highlights
"Beast Within"
"When The Smoke Clears"