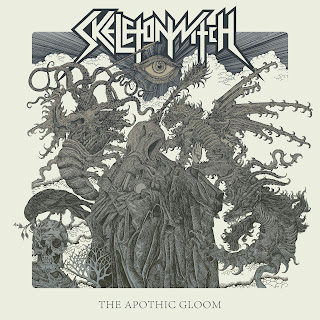 Despite numerous efforts in the past, I’ve always had a difficult time appreciating Skeletonwitch. It wasn’t anything in particular that turned me off from the band, but I was just never drawn back to their music. As is often the case, a rousing live performance tends to make me realize my mistakes. After seeing the band crush everything in sight at Heavy Montreal this year, checking out the band’s new EP (with their new vocalist) seemed like a logical step.

Put simply, “The Apothic Gloom” is a serious thrashing force that is filled with twists and turns. It provides a stellar dosage of both death and black metal to go along with the band’s thrash base. The way these three subgenres are intertwined is consistently impressive, with many riffs taking more of a pure black metal approach (using tons of dissonance and aided by blast beats). “Black Waters” even brings back images of bands like Sacramentum and Dissection at times. The true genius of Skeletonwitch, however, is their usage of even more melodic guitars. Often times this takes the form of harmonized leads, and the band uses these sections to put a significant amount of emotion into their music. The doomy sounds that open and close the title track, “The Apothic Gloom”, are just one of many examples. On the other end of the spectrum, the band uses similar techniques throughout “Red Death, White Light” to build an intense, epic climax to the EP. This last track also has an incredible bouncy riff after about 4 and a half minutes in, which is just another example of this band separating themselves from the crowded thrash pack.

Between the more melodic sections, Skeletonwitch just piles on an absurd number of riffs. As long as you can handle some black metal in your thrash, the result will be worthwhile. The rhythm section supports the rest of the band adequately. In other words, their playing is tight beyond belief. The drumming on “The Apothic Gloom” is consistently impressive, with numerous interesting fills, and tons of speedy beats. The bass playing is given room to shine thanks to the guitar harmonies, but even holds its own during the thrashier riffs.


For most Skeletonwitch fans, the point of contention for this EP will be the band’s new vocalist. As stated above, I was never particularly attached to this band in the past, and so I had no serious expectations of new growler Adam Clemans. He more than fulfills his duties on this record. Unsurprisingly, he can do it all in terms of harsh vocals, displaying a wide range of pitches and brutality. His performance is likely to be enough for most listeners because Skeletonwitch is mostly about the guitar playing (on this EP at least). “The Apothic Gloom” is one of those releases that makes me question if I was the problem, or if Skeletonwitch has truly stepped up their game. One thing is for sure, "The Apothic Gloom" is an essential purchase for all fans of extreme metal!