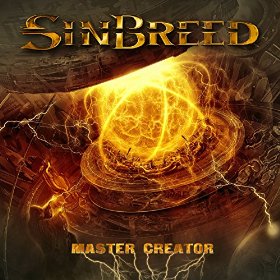 Sinbreed is a band that should be far more well-known than they have been to this point given the quality of their output. I am one of the shameful legions who remained ignorant of the band until frontman Herbie Langhans’ collaboration with Avantasia earlier this year. If “Draconian Love” is the song that brought you here, you might be disappointed to know that Herbie sounds nothing like that on “Master Creator”. One would have expected a mystic, gothic rock-esque performance all throughout this record, but Herbie is actually much closer to a singer like Jorn Lande (meaning that Avantasia fans will still be ecstatic with his performance). He isn’t quite as powerful, but he compensates for that by having a wider range that goes into melodic singing at times. In general though, he tends to utilize his raspier, more aggressive voice on this record.

As good as Herbie is, it would be a mistake to dismiss Sinbreed as simply the band he sings for. The music on this record is some serious, high-speed power metal. The reason why Herbie is such a great fit for the band is because they are truly crushing. Bands like Iron Savior, early Blind Guardian (first two albums), and Orden Ogan on their heavier material are good reference points. Though I despise the derogatory term flower metal, Sinbreed is about as far as you could get from those types of power metal bands. They’re almost like a speedier HammerFall: tons of great melody, but insane shredding riffs too. The verses of “Across The Great Divide” have some of the speediest, sharpest picking amongst any power metal bands.

The guitar tone definitely enhances this record substantially. It’s almost as if a thrash band were playing power metal; though not quite as potent as something like Razor, the approach that Sinbreed goes for is largely the same. The way that they intertwine this with melodic lead playing that is more common in power metal is truly impressive. Even better, however, is the fact that Sinbreed writes catchy songs. The aforementioned “Across The Great Divide” is locked in battle with “The Riddle” for the most memorable song, but make no mistake, this album is overloaded with hits. The first 5 songs as a whole come out strong, and strike one after another, only rarely letting up, with numerous double bass assaults. The second half of the record remains strong as well, though the closer, “On The Run”, is probably the weakest track. Its chorus feels a little too jolly, and not quite in the same spirit as the rest of the record. It is certainly not awful, but a major change of pace from the blazing sounds that precede it.


On the whole, “Master Creator” was a major surprise. It does stand out amongst the power metal world simply for being more aggressive. If Masterplan’s first album was going full-speed for its entirety, that would more likely approximate what Sinbreed has done here. The Avantasia collaboration was great for getting Herbie’s name out there, but Sinbreed is another entity altogether. This is power metal with no frills, and it is difficult to imagine any fans of the subgenre not digging this.