Malichor - Lurkers in the Crypt [EP] 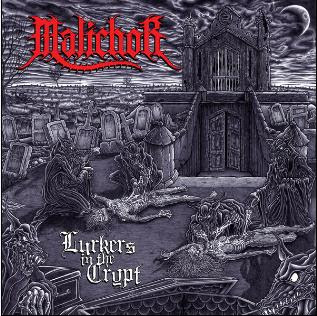 Australia has already delivered some of this year's best releases and the bands from down under don't seem content yet. In addition to the terrific releases from groups like Mongrel's Cross, Ignivomous, Sewercide and Inverloch, Malichor is adding their new four-song EP "Lurkers in the Crypt" to the Aussie lineup for 2012. This band's style of black/thrash is definitely a bit different from their other comrades, as Malichor doesn't really attempt to slay the listener with an onslaught of intense riffage or bestial anthems, rather they tap into their dark side to produce some of the more evil and murky thrash in 2012.

Malichor couldn't have picked a better title for this EP, as the four songs all sort of lurk, rather than charge ahead and destroy. There aren't many blast beats or aggressive double bass assaults, as the band lets the riffs resonate in the listener's skull while Defiler's (typical black/thrash) vocals attempt to add some more haunting moments to the music. Almost all of the riffs on "Lurkers in the Crypt" are nothing more than some tremolos (some better than others) and they all follow a similar pace, rarely reaching faster speeds. "Jackal's Spell" and "Demonic Power to Infinity" have some slight melodic tendencies in the main riffs at times and it reminds one of black metal bands like Dissection or Immortal. "Cerebral Debauchery" is the outlier of the four tracks, as it possesses riffs that aren't just tremolo bursts, but rather some decent thrashy riffs and some chilling melodies. Malichor aren't quite at the level of bands like Gospel of the Horns, Vomitor or Mongrel's Cross, but "Lurkers in the Crypt" provides a decent alternative to the viciousness that the other groups excel at, as well as shows some real potential for the band's future.

Be sure to check out the band's Reverbnation page!
http://www.reverbnation.com/malichor