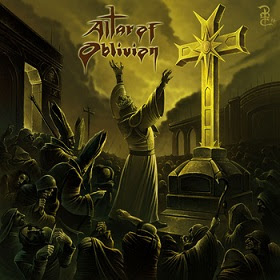 After listening to this album, I entirely regret not checking out the "Salvation" EP that this band released earlier this year, because "Grand Gesture of Defiance" is definitely one of the best albums I've heard in 2012. I've seen this band referred to by many on the internet as one of the best heavy metal bands from Denmark since Mercyful Fate and King Diamond, and a lot people who have claimed that for these epic doom masters wouldn't be too far off. The first listen to this album was enough to make one appreciate how great it is, but after listening to it a handful of times later, this is easily a contender for the metal album of the year, as the band's brand of doomy heavy metal is incredible to say the least.

The structuring of the music is probably the most essential part of Altar of Oblivion's epic sound. With only five songs (and one instrumental) the band was able to focus on each track and make them all equally epic, yet entirely different. The riffs range from heavy riffs that slam the listener with doomy powerchords ("Where Darkness Is Light") and the occasional upbeat headbangers all the way over to beautiful combinations of the electric and clean guitar riffs ("In the Shadow of the Gallows"). "The Graveyard of Broken Dreams" is one of the more melodic songs on the album, as it uses the melodic passages for terrific atmospheric purposes as well as creating a perfect backdrop for the incredibly catchy chorus. "Sentenced in Absentia" is definitely the masterpiece of this album as everything here clicks to make the track a very memorable one. The drumming, basslines, vocals, riffs and everything in between all excel in order to capture the listener's attention, while showing absolutely no intent on letting the listener go.

Meister's vocals are a highlight of their own throughout "Grand Gesture of Defiance." This man's singing is clean, soothing and at times a little haunting (his vocals in "Sentenced in Absentia" gave me goosebumps at one point and his performance on "Final Perfection" is phenomenal as well). Combine his fantastic singing with the very capable rhythm section, and you will get yourself amazing results, much like Altar of Oblivion did with this album. I didn't even mind the use of keyboards, as they're used very subtly and aren't made the focal part of the music. This album should be able to get the band the attention that they deserve, as they have released one of the best epic doom metal albums I've heard since Solstice's "New Dark Age." Do not sleep on this album and do not be surprised when "Grand Gesture of Defiance" tops many of the end of the year's best lists.