Stallion – From The Dead 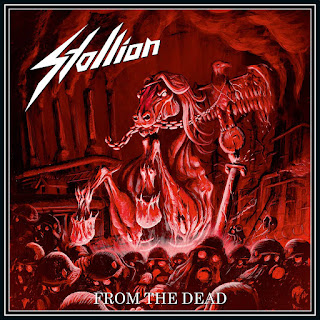 “From The Dead” is the second full-length release by German speed metal band Stallion. The group quickly made a lot of noise with their “Mounting the World” EP in 2013 and subsequent full length the next year. Though it has been a few years since then, Stallion is back and just as good as ever. Upon first impression however, this album might feel a bit different. The lead track, “Underground Society” shows the band taking a much darker, thrashier direction. This is certainly the heaviest song they’ve done to date, and while lead vocalist Pauly’s vocals remain as high-pitched as ever on this record, he has more of a snarl on this particular track.

It isn’t long before the band returns to their more familiar sound, but interestingly, they spend a few tracks in mid-paced territory before reverting to high-velocity speed metal. Each of the next three songs, “Down And Out”, “Hold The Line”, and “Waiting For A Sign” are not particularly fast (except for the occasional moment where things speed up, such as the second half of “Down and Out”), but Stallion are adept at writing catchy fist-banging anthems. These tracks offer an opportunity for Pauly to shine once again. His voice remains in the stratosphere, as he hits notes that nobody has any business hitting (and he uses this range almost exclusively). These tracks also demonstrate Stallion’s ability to create truly memorable simplistic riffs. Unlike many of their contemporaries, Stallion’s less involved riffs bring back the glory of NWOBHM and other early 1980s bands. The result is a classic sound that is anything but boring, despite the tamer tempos.


From this point onwards, the record becomes more in line with “Rise and Ride”, as the band offers up plenty of faster tunes, with the more occasional slower moment as a break. These later songs reveal that Stallion’s shredders can compete with the best of them, as they unleash numerous solos containing intricate fretwork. “From The Dead” as a whole is pretty faithful to the band’s sound outside of the opener. The main problem is its unevenness as a record. Even after the three mid-paced tune, the title track kicks off with an acoustic intro, and then the following song is the 17-second “Kill Fascists”. The result is an album that does everything right, but feels a bit off. Of course, this is just the flow of the album; the songs themselves are all fantastic, and that is ultimately what matters most. This makes Stallion’s “From The Dead” another essential purchase for all fans of speed metal!

Highlights
"Underground Society"
"Down and Out"
"Waiting For A Sign"

at 8:48 AM
Email ThisBlogThis!Share to TwitterShare to FacebookShare to Pinterest
Labels: 2017, From The Dead, Germany, Heavy Metal, Speed Metal, Stallion