Phidion – The Throes of Scourge 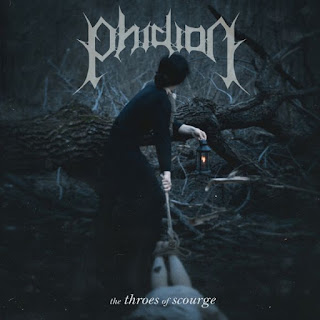 After many years without a full-length, Swedish death metal group Phidion has finally unleashed their first studio record, entitled “The Throes of Scourge”. Sweden’s history with death metal is interesting because there are two very distinctive sounds coming from it. The old-school bands like Entombed, Dismember, and others are of course famed for their HM-2 crunch, yet the bands that came just a few years later created the classic Gothenburg melothrash sound. Bands in 2017 often cling to one side or another, but Phidion manages to incorporate elements of both successfully. In general, they lean much more towards the old-school death metal side of things, with an eternally heavy guitar tone, yet there’s a certain catchiness to their riffs that brings memories of bands like Dark Tranquillity.

Phidion’s ability to diversify their sound a little bit keeps “The Throes of Scourge” a compelling listen throughout. Tracks like “Swarming Spectres” and “Derek’s Don’t Run” almost have a bounciness to them, amidst a flurry of blast beats and tremolo-picking. The band doesn’t ever get too technical (true to the Swedish sound), but there are some slightly busier riffs in a track like “Anthropophagus”. A lot of the time when Phidion isn’t using tremolo-picking, however, they opt for heavily muted, chunky power chords.


“The Throes of Scourge” does many things well, and there are few faults to it. I’ve always been more partial to the Floridian style of death metal, so Phidion’s strengths don’t necessarily line up with my tastes, but that doesn’t make this a bad release at all. It’s faithful to the genre’s forefathers without being a direct ripoff or clone, and the result is something that should appeal to most fans of old-school death metal. The slight nods to more melodeath sounds often come through the thrashiness of certain riffs, and if you’re into old-school death metal, you probably have a good background in thrash, so those riffs will definitely be appreciated. All in all, “The Throes of Scourge” is a very solid effort that will be appreciated by most death metal fans!

at 9:38 AM
Email ThisBlogThis!Share to TwitterShare to FacebookShare to Pinterest
Labels: 2017, Death Metal, Phidion, Sweden, The Throes of Scourge