Secret Sphere – The Nature of Time 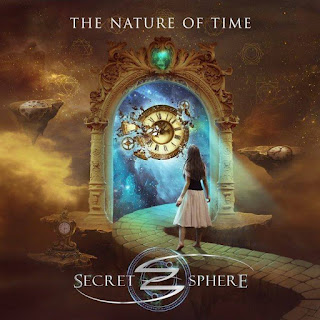 Secret Sphere stands tall as one of Italy’s best-kept secrets (pun intended). For years, they pumped out very solid progressive power metal releases. In 2012, however, they were joined by a singer whose talent transcends reality. Michele Luppi’s voice is in the upper echelon of singers like Daniel Heiman or Michael Kiske. He’s so much better than every other singer out there, that it has drawn a lot of attention to the band. And rightfully so: 2012’s “Portrait of a Dying Heart” is an unbelievable effort, with a dynamic range of sounds that is topped off by Luppi’s incredible performance. The band has since re-recorded one of their older records with Luppi, but the real point of interest is their next full-length: “The Nature of Time”.

Though it might differ somewhat sonically, “The Nature of Time” is actually consistent with many of Secret Sphere’s albums prior to “Portrait of a Dying Heart”. The band has excelled at writing a handful of truly incredible, memorable tunes on each record, with the remainder of the songs being simply enjoyable. In this case, it is the single, “The Calling”, which stands out as the band’s most potent effort. It isn’t a speedy or upbeat track, but it does have that soothing romantic feel that a lot of Italian power metal owns. Luppi’s performance is of course the driving factor for this song, but all of the instruments come together successfully: the way the bass drum doubles up in the final chorus is perfect, the guitar solo has magnificent phrasing, and the keyboards as always provide great atmosphere.

“The Nature of Time” spends a lot of time – too much in fact – on its softer side. Few bands are equipped as well as Secret Sphere to pull this off, but this is supposed to be heavy metal, with an emphasis on heavy. Some of the more aggressive tunes like “Courage” or the lengthy epic “The Awakening” show the band at their best because of the sheer energy they contain. While some of the more somber tracks like “Love” and “Kindness” are done tastefully, there’s simply too much of it on a 55-minute record. Even a song like “Faith”, which spends much of its time with distorted guitars, just doesn’t feel all that heavy, particularly compared to some of the band’s previous work. The album does start to get heavier towards the end (such as on "Commitment", where the band borrows the feel of Angra's "Nothing To Say" in the intro), but the damage is done by this point.

The other fault of this record is the fact that it’s a concept album. While this is not inherently a problem, the outro of every single track has some sort of interlude or voiceover. It makes the album a very seamless experience, which is appreciated, but it also accentuates the lack of individual highlights. It’s easy to forgive these moments on an album like “Operation Mindcrime” where every single track is one of metal’s most compelling songs, but on “The Nature of Time”, it is harder to overlook.


To be fair to Secret Sphere, the criticisms of this album are amplified because of how good the last record was. “Portrait of a Dying Heart” was a testament to what happens when every musician is clicking on the same page. Luppi took an already great release to the next level, but on “The Nature of Time”, his talents feel underutilized. Sure, he’s carrying some of the more monotonous tracks, but there is so much potential hidden within this band that they only occasionally tap into. To reiterate, “The Nature of Time” is very enjoyable; it just isn’t a top-tier release like the band’s last record.

Highlights
"The Calling"
"Courage"
"The Awakening"

at 9:05 PM
Email ThisBlogThis!Share to TwitterShare to FacebookShare to Pinterest
Labels: 2017, Italy, Power Metal, Secret Sphere, The Nature of Time