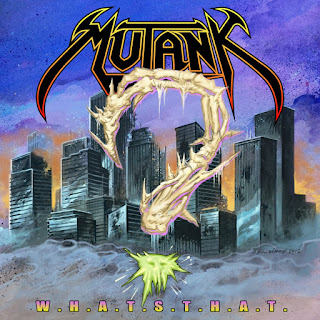 One of the more forgotten styles of thrash in the resurgence of the last decade or so has been crossover thrash. Modern bands seem to be a little more obsessed with adding death or black metal influences, but fortunately, there are still groups like Mutank to deliver the silly lyrics and gang vocals of crossover thrash. Case in point is their new EP, a 5-track effort that delivers a whopping 10-minutes of material. This release is fairly true to the Suicidal Tendencies or Nuclear Assault brands of crossover. Mutank doesn’t hit the extreme speeds of bands like Cryptic Slaughter or Wehrmacht, and instead opt for a mix of upbeat punky rhythms, and more mid-paced rocking songs.


Unsurprisingly, the vocals consist almost entirely of shouting, with minimal variation in tone. Nothing else could be appropriate though, and it’s majorly appreciated that the singer never resorts to growling, or a more extreme vocal style. The production also feels as though it came straight out of the 1980s, and the loud thumping bass once again draws comparisons to Nuclear Assault. Of course, referencing these bands is only in relation to Mutank’s general sound, as their songwriting isn’t quite up to par with these more legendary groups. There are cool moments, particulary the galloping and bass-heavy, Iron Maiden-influenced intro track. Likewise, the closer manages to be pretty memorable, as do a few other moments on the EP. Simply put though, there isn’t a lot of material here. Everything the band does generally works, but it is a fairly safe release that could benefit with at least a couple of hyperspeed tracks.