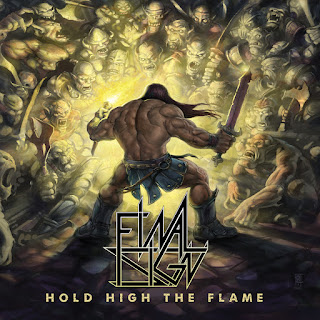 “Hold High The Flame” is the debut record from American power metal band Final Sign. This album was put out by Divebomb Records, a label that is likely more well-known for its reissues than newer releases, but nevertheless, this is an album that will appeal to the label’s core fanbase. Final Sign’s version of power metal is very old-school. They offer the all guns blazing approach of records like “Thundersteel” and “Painkiller”, driven by speedy riffs, over the top vocals, and lots of double bass. The most noticeable element amongst these three is definitely the singing. Vocalist Shawn Pelata has one of those voices that is so insanely powerful that it transcends everything else that goes on. It is reminiscent of singers like Ripper Owens or even Ralf Scheepers on the early Primal Fear records. Unlike those singers however, Pelata has better control over his voice and doesn’t just hit ridiculous notes for the sake of hitting them.

One of the things that makes “Hold High The Flame” stand out immediately is just how many songs it has that are memorable upon first listen. The opener, “Daring The Sun” is certainly the most obvious choice, as the shouts of the title from the backing vocals are easy to sing along to. The next track, “Burn The Temple Down”, is a mid-paced stomper that actually reminds one again of Primal Fear (largely because of the groove it gets into once it really gets going) and surprisingly of Metalium (because of the heavy use of backing vocals). The title track shows Final Sign quickly returning to blazing power metal. “Possessor” is a song that takes a different approach, as it provides somewhat of a death metal assault. The vocals are still high-pitched, but the riffing is chaotic and wild, and is distinct from the riffs on the rest of the album.


No metal album is complete without the obligatory ballad, and “Scaling Lies” is as close as Final Sign is willing to get, even though it gets pretty heavy. The remainder of the second half of the album isn’t quite as strong, but it certainly doesn’t show the band veering off course. "Madness Eternal" even throws some blastbeats into the mix, as well as the quintessential "whoa-oh-oh" section. Ultimately, “Hold High The Flame” is an album that’s going to appeal to all of those metal fans who dislike modern power metal under the (false) pretense that it has no power in it. This album absolutely exudes power. Final Sign embraces the ‘80s, and “Hold High The Flame” is an excellent release from a promising new band!

Highlights
"Daring The Sun"
"Burn The Temple Down"
"Scaling Lies"