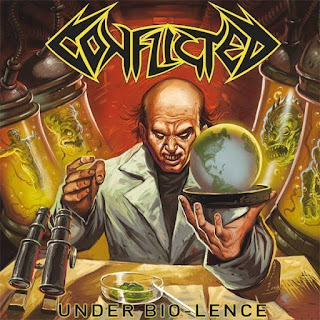 “Under Bio-lence” marks album two for Chilean thrashers Conflicted. This release is a short but sweet ode to old-school thrash, as it prominently displays the vast majority of the subgenre’s traits. In fact, one might even say it is too true to the subgenre. Conflicted doesn’t inject any elements of speed, death, black, crossover, or power metal in their sound, making “Under Bio-lence” a very pure sounding record. This means that bands like Exodus or Vio-lence are the primary influences on this album. Of course, this acts as a double-edged sword. On the one hand, it’s hard to mess up this style, which is why this is a serviceable record that is loaded with awesome riffs, gang vocals, and other thrashy moments. On the other, it’s also hard to stand out. The only real way to do it is to write truly great songs, and that is unfortunately where Conflicted falls short. Despite having listened to this album numerous times, nothing has stuck yet.


To be fair to the band, this album has perfect execution. The production is huge, meaning that the guitars manage to be both thick and crunchy. The single-axe attack means that the bass playing can be heard loud and clear, particularly during a guitar solo (“Legal Emptiness” and “Public Privacy” having the best examples; some other songs have added rhythm guitar backings while these ones forego it). The drums are balanced to perfection, meaning that you’ll never miss a cracking snare. Even the singing on this album is exactly what you’d expect. The vocalist’s accent is minimal, perhaps even non-existent. He’s also very clear, and doesn’t resort to growling at all. On the whole, “Under Bio-lence” is an album that delivers on its premise. While not offering anything unique, you can be sure that this record will fit as well in your thrash collection as the album artwork does.