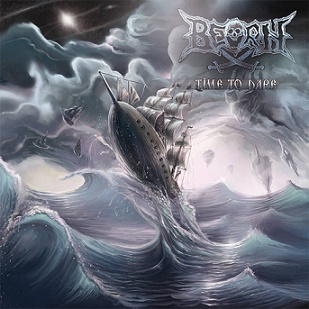 From the surprisingly metal-rich country of Russia comes Beorn, and their debut album “Time To Dare”. Though this album is filled to the brim with power metal tropes and clichés, it also takes a very different approach to the subgenre, demonstrating an eclectic set of sounds and influences. Sometimes it isn’t so much what they’re playing, as the way they’re playing it that makes Beorn sound different from everyone else. Even their fastest and most energetic songs all have a bouncy feel to them. This is particularly evident in “Riders of the Sky”, the first full-length track, which is your prototypical upbeat, catchy power metal opener. It is on this song that you’ll first notice Beorn’s unique singer. Some quick research showed that it is a guy, but to be completely honest, he sounds more like a female power metal vocalist. He certainly isn’t your average, fluffy symphonic metal vixen, instead opting for a slightly harsher tone. Nevertheless, this actually has a positive impact on the record simply because it isn’t something you hear as often.

It isn’t long after “Riders of the Sky” that the band begins to show their experimental side. “Star Ocean” is perhaps the biggest offender; a song that is again largely based in power metal, but also has extensive keyboard use in a more electronic format. Whether it’s the opening moments, the tranquil notes at the end of the bass interludes, or the full-on electronic bridge, this song embraces being different. The best part about it is that it is so well executed. This is by far the catchiest song on the album, with even the verses being something you’ll want to sing along to. This is one of two tracks where the stellar bass playing comes to light (the other being "The Beast"), which is just another element separating Beorn from the crowd.


On “In Quest For Planet Eden”, Beorn drops the metal almost altogether. This is not uncommon for a power metal ballad, but the band’s singer causes this song to really standout. Despite being just three tracks in with lots of diversity at this point, Beorn does a better job of mixing and matching their influences for the remainder of the record. It is not uncommon for a song to go from blazing, Dragonforce-esque speeds to poppier sections in an instant. Again, it is largely the singing and the use of keyboards that allow Beorn to successfully experiment. There is still more than enough standard sounding power metal here (“The Chest of Deadman” and “Galaxy In Flames” come to mind, but anything on the second half of the record applies) to satisfy fans of the subgenre. “Time To Dare” is truly a unique release, and in a style with many clones and copycats, this individuality is appreciated.

Highlights
"Riders of the Sky"
"Star Ocean"
"Galaxy In Flames"

at 10:21 AM
Email ThisBlogThis!Share to TwitterShare to FacebookShare to Pinterest
Labels: 2015, Beorn, Power Metal, Russia, Time To Dare