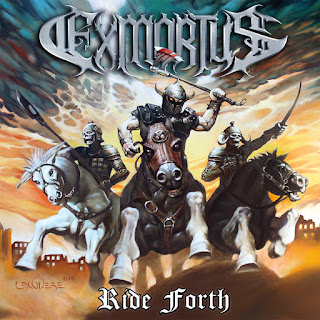 Less than two years removed from their last record, American thrashers Exmortus are back with a new album entitled “Ride Forth”. Fans of the band will be glad to know that this release is stylistically quite similar to the last one, and just as good. In fact, the opening moments of “Speed of the Strike” immediately show off what Exmortus is all about: hyper-technical guitar playing that is heavily inspired by classical music. Another way to describe it would be saying that Exmortus sounds like what would happen if Yngwie Malmsteen made a thrash record. The sheer complexity of the riffs is astounding (especially when you consider that one of their guitarists is also singing). At a certain point it becomes more of an exercise in memory than technical ability. No song offers a rest, as the band thrashes with full force all throughout the record. Even the bassist gets in on the action. The harmonized guitar work offers Exmortus’ low-end plenty of room to shine (this is particularly evident on "Hymn of Hate"), and their bass player moves between also harmonizing with the guitars, or offering less crazy, but more melodic lines. The technicality builds throughout the record until the band hits “Appassionata”, a 5 minute instrumental that shows off everything they have. Moving up and down the fretboard with ease, this song will make you want to quit playing bass or guitar, as you’ll never be able to compete with Exmortus.

“Ride Forth” has a lot more to offer than mindless shredding though (a term that is unfortunately derogatory to a lot of metalheads; I love this kind of stuff, and certainly don’t like calling it mindless). Jadran Gonzalez’ vocals are an excellent complement for the rhythmic assault the band provides. He uses a harsh tone that leans more towards death than thrash, not unlike Mille Petrozza or Tom Angelripper. Though the drums have less room to be flashy relative to the rest of the music, they provide an aural attack that makes for some seriously aggressive music. The two work in tandem particularly well in a song like “For The Horde”, where Gonzalez’ screams of “Whiplash! Hack slash!” seem perfectly synced with the rest of the music. Another song where they do something a bit different is “Black Sails”, which locks into an awesome mid-paced riff. This is a bit of an homage to more old-school thrash, as it lacks the technical wizardry of a lot of the other riffs on this album, but hits such a nice groove that it is gladly welcomed.


Relative to “Slave To The Sword”, “Ride Forth” is a more consistent record, but with less individual highlights. In other words, the prior album had higher highs, but lower lows. There really isn’t a moment on “Ride Forth” that won’t induce serious pain on your neck, but there also isn’t anything quite as anthemic as “Metal Is King”. Nevertheless, “Ride Forth” is a worthy successor simply because Exmortus still makes this style of thrash interesting. There is no other band in the metal scene that sounds like Exmortus, and “Ride Forth” is another stellar release!

Highlights
"Speed of the Strike"
"For The Horde"
"Appassionata"

at 10:29 AM
Email ThisBlogThis!Share to TwitterShare to FacebookShare to Pinterest
Labels: 2016, Exmortus, Ride Forth, Thrash Metal, USA