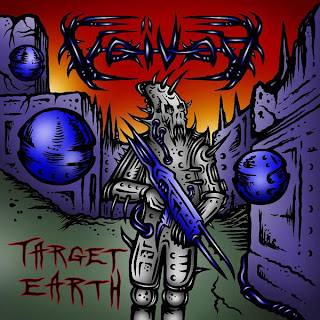 Voivod is definitely a band known for trying new sounds. While I’m not familiar with their entire discography, what I do know is very wild and weird for a thrash band. Their bizarre, almost-schizophrenic sounding riffs were crafted by the heart and soul of the band, Piggy (RIP). While many may not have wanted Voivod to continue without him, it is fair to say that the new guitar player, Chewy, has completely mastered Piggy’s sound. If you didn’t know it wasn’t Piggy playing guitar, you’d imagine you were right there in 1988 listening to the band. In fact, Voivod’s newest record, “Target Earth” is a complete throwback to the Killing Technology/Dimension Hatross era.

From start to finish, "Target Earth" is an intense affair. Most of these tracks are either mid-paced rockers, or uptempo thrash/speed songs. Without exception, every single song features dissonant, jarring riffs that would make the average pop fan’s ears bleed. Seriously, if you’ve never heard Voivod, I couldn't imagine you would take to this style quickly, but if you did, “Target Earth” would be the record to convince you. Perhaps what makes this record even stranger is the use of chords that I’m not sure even exist. I’m sure there’s some sound music theory behind them, but Chewy must have really put in some effort to create chords that are extremely uncommon. Aside from the masterful guitar playing, “Target Earth” is also dominated by Snake’s great vocal performance. His punkish sneer sounds just as menacing as he did in the 80’s. In terms of songwriting, most of the 10 songs are pretty similar. “Target Earth” and “Mechanical Mind”, the two singles, are the best-written songs of those that are alike, but luckily, there are a couple other standouts as well. “Resistance” displays the band’s punk influences with classic Voivod rhythms in the verse riff. In addition, “Corps Ètranger” is the fastest and most brutal song on “Target Earth”. As somebody who prefers their thrash more straightforward, this song was the absolute highlight for me. Ultimately, however, this record is dominated by the aforementioned riffing style.

Voivod are back and they sound as great as ever. If you are expecting yet another innovative sound, you might be disappointed, but if you like old school Voivod, “Target Earth” is the perfect offering for you. Personally, I was never the biggest fan of Voivod, simply because it’s a little too weird for me. Even to me, however, it is clear that this shows the band at their best, and you are definitely missing out if you don’t buy “Target Earth”!

Be sure to check out and like Voivod on Facebook!
http://www.facebook.com/Voivod?fref=ts
Highlights
"Target Earth"
"Resistance"
"Corps Ètranger"