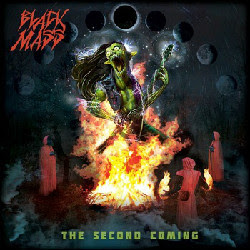 Sometimes a band gets it so right that there isn’t much to say. When a band so perfectly encompasses what makes a genre great, it is really more appropriate to just listen to them. This is the case with Black Mass, a new thrash band out of Boston. These guys play thrash as it was meant to be played: fast, heavy, and totally uncompromising.

Although the download I got of this demo appears to be in the wrong order, having “Mountain of Skulls” as the opener is most appropriate. You are immediately hit like a fist in the face (to take a phrase from Morbid Scream) by an incredible drum fill before the guitars kick in. The main riff in this song is the highlight of this demo and the band knows it. It is repeated a startling amount of times, yet the song never manages to lose interest. “March To Hell” is another no-nonsense thrash metal assault. It is not quite as entertaining or memorable as “Mountain of Skulls”, but it gets the job done. “Death In The Flesh” opens with some bone-crushingly heavy riffs, before launching into another speedy tune. Once again, it is a serviceable track that will definitely hurt your neck. What is most satisfying about these latter two songs is that they never have an uninteresting moment. While most thrash is merely passable, Black Mass have an element to their songwriting that is a cut above the average thrash band.

Ultimately, this is a solid demo. It’s exactly what you want in thrash metal. The band have released “The Second Coming” as an EP recently, that includes a couple more songs and is sure to be quite enjoyable. Check that (or this) out as soon as possible!