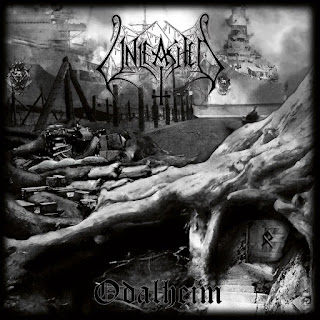 While many are rightfully praising the everlasting consistency of bands like Immolation, Bolt Thrower, and Cannibal Corpse, among others, few ever talk about one of the gods of Swedish death metal: Unleashed. “Where No Life Dwells” was a true classic in the genre, but the band has moved on to a new sound since then. Recently, Unleashed has crafted music based on ancient gods, the likes of which set the scene for some epic, stomping death metal. With “Odalheim”, the band have proven once again that you don’t need to write a masterpiece, you just need create a consistent record, with perhaps a new bit of flair to keep things interesting.

The opener, “Fimbulwinter”, shows the band testing the waters with some black metal elements. Behind a sea of blast beats, the guitarists use plenty of tremolo picking to create some atmospheric moments. In addition, vocalist and bassist Johnny Hedlund adds in some higher rasps at times. Aside from this great track, most of the rest of the album is in line with what you would expect from Unleashed. Heavy, muted, downpicked riffs set the stage for the war-themed lyrics and music. The most apt comparison would be to Amon Amarth, as they share that sheer tenacity for battle in their music. Overall, however, Unleashed is definitely quite a bit faster, and Hedlund has a greater vocal range. It's a shining example of melodic death metal that has more emphasis on the death metal part than the melodic part. The songwriting is a mixed bag. There are plenty of good tracks, but quite a few songs just exist. It’s not a bad thing; the general sound of the band is enjoyable, though it would have been nice for “Odalheim” to be as memorable as “As Yggdrasil Trembles” was. While I've never heard of producer Fredrik Folkare, he has made this album sound fantastic. The guitars are bludgeoning, and the drums accompany this perfectly. Hedlund's vocals sound clear and are fairly easy to understand. Ultimately, this is a very satisfying sounding record.

It’s amazing to think that “Odalheim” has been out for nearly a year and yet I’ve barely heard anything about it. This record is yet another example of a band who have made a living by staying true to making great music. If all goes well, hopefully Unleashed can make yet another great album in a year or twos time. If you haven’t heard this, or any other later Unleashed, now is the time!