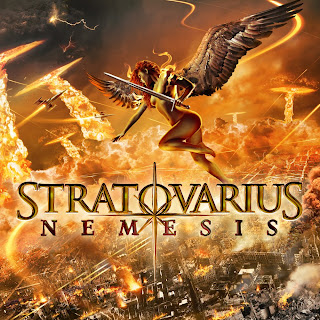 Ever since getting rid of the man who first made Stratovarius brilliant, this band has been on a roll. “Polaris” was an enjoyable power metal album filled with some catchy tunes. It wasn’t groundbreaking, but it brought Stratovarius back to relevance. “Elysium” was and still is my favourite Stratovarius record. Every song (except for “Lifetime In A Moment”) is nothing short of spectacular. It would be an understatement to say that “Nemesis” was my most anticipated album of 2013. The lack of Jorg Michael did make me expect the drumming to be much worse (after all, he killed it on “Elysium), but it’s safe to say my expectations were inflated anyways. To further those expectations, the band released “Unbreakable” as the first single, and that got me more hyped up than ever.

“Unbreakable” is a perfect power metal song. The opening piano melody sets the tone for Timo Kotipelto’s incredible performance in the chorus. The rhythm section perfectly backs this up, both at the beginning of the song when it first kicks in, and when the triplets are played in the chorus. The bridge features a riff way too heavy for Stratovarius, but it keeps an element of surprise to an otherwise predictable song. Rather than a solo, there is a somewhat atmospheric section before heading into the final chorus. If my rating were based on this song alone, it would probably get 5/5. The other single, “Halcyon Days” is the most out of character song I’ve heard by the band. While the chorus is poppy, it is preceded by a short, almost techno-like moment that makes the chorus literally sound like it was pulled out of top 40 radio. I’m not even referring to the sheer catchiness of power metal; this is a chorus that I would expect non-metal fans to be listening to. Despite that, it’s actually quite enjoyable, and I have to commend the band for doing something unique. Where I don’t appreciate it, is in the bridge, which is a full techno/computer sounding part. I honestly have no clue what the band was trying to accomplish with this section. If this part were removed from the song, “Halcyon Days” would be a true Stratovarius classic.

Unfortunately for me, this is where this album took a turn for the worse. None of the other songs are genuinely bad, or even mediocre. They just aren’t at the level set by “Elysium” and the two singles. Bringing in Jani Liimatainen for songwriting really helped “Out of the Fog” to have more intense riffing than it would otherwise. The Jens Johansson penned “Castles In The Air” may not be as potent as “The Game Never Ends”, but it is still an enjoyable song, especially with the piano opening. Lauri Porra’s sole contribution, “Fantasy” is a big improvement over the song he put on the last album. When it comes down to it, it is really Matias Kupiainen that let me down. Despite contributing the two best songs and the thrashy “Stand My Ground”, his songwriting wasn’t consistently great.

“Nemesis” is not a bad album; in fact, it’s really good. The problem (if you can call it a problem) is that the bar was set too high with their previous record. Aside from the techno influence on “Halcyon Days”, this album is really no different from “Polaris”. It is definitely a little bit darker than anything else I’ve heard by the band, but it’s ultimately still Stratovarius. Fans will enjoy it, but if you expect it to be their best album, you will probably be disappointed. Buy it regardless, and enjoy this Stratovarius album!