Gloryhammer - Tales From The Kingdom Of Fife 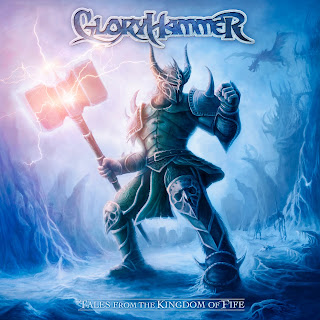 When it comes to power metal, you can’t go wrong with sounding epic. While many of my favourite power metal bands are known for their virtuosic musicians, only a select few create an atmosphere of glory. This is where the aptly titled Gloryhammer enter the picture. With “Tales From The Kingdom of Fife”, this band delivers some of the most heroic, war-laden anthems this side of Manowar. Before getting into the music, it’s worth mentioning that this project features Alestorm frontman and keyboardist Christopher Bowes. While this band sounds very different from Alestorm, there are most definitely hints. A couple melodies throughout the album (the opening to “The Unicorn Invasion of Dundee”, parts of “Hail to Crail”) feel more at home on an Alestorm album. In addition, the final epic song features some moments that are very reminiscent of Alestorm’s “Death Throes of the Terrorsquid”. Ultimately, however, “Tales From The Kingdom of Fife” is its own beast, complete with its own epic singer and stories.

Thomas Winkler is the man who drives this record. His vocals are admittedly fairly standard for power metal, but he has an authenticity in his performance that is rarely matched. When his voice soars during choruses, he really sounds like he’s defending Dundee (or maybe Cowdenbeath, I really have no clue what they're talking about). Perhaps even more enjoyable are the vocal melodies. There is not a single refrain that isn’t the pinnacle of catchiness. Even when the band isn’t playing particularly fast, such as in “Quest for the Hammer of Glory” and “Hail To Crail”, Winkler’s cries will be stuck in your brain. Musically, this record is nothing special. Sure, it’s epic, and it’s power metal, but the solos or the riffs won’t blow you away. The band is at their best when playing at the lightning pace set on “Amulet of Justice”. If there is one thing I want more of from Gloryhammer, it would be speed. “The Unicorn Invasion of Dundee” is another good example of Gloryhammer’s full potential. Regardless, there are no bad songs here. It’s a testament to a band when their worst song is the one that is also the most epic (“The Epic Rage of Furious Thunder”). This song, while enjoyable, is hurt by unfitting female vocals. Aside from that, “Tales From The Kingdom of Fife” is a record for all fans of power metal.

If it hasn’t become clear yet, this album is as over-the-top as humanly possible. The song titles are ridiculous (in a good way) and the lyrics follow appropriately. Winkler and Bowes is a fantastic combination that creates an unparalleled atmosphere of swords and sorcery (among other things). If you don’t appreciate the imagery in power metal (and black or death metal, for that matter), you might be discouraged from hearing this album, but don’t ignore it; you’ll definitely be missing out!

Be sure to check out and like Gloryhammer on Facebook!
http://www.facebook.com/gloryhammer?fref=ts
Highlights
"The Unicorn Invasion of Dundee"
"Amulet of Justice"
"Hail To Crail"