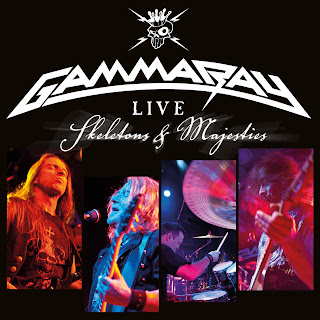 Every time I hear a new live album, it reminds me why I dislike them. Whether the band gives a bad performance or chooses a poor setlist, I generally find myself disappointed. Add to that the fact that they are long (which is great when you go see a band, but I prefer albums to be short) and I find myself disliking them quite a bit. With that in mind, I was skeptical of “Skeletons & Majesties Live”, even if Gamma Ray is one of my favourite bands. I’ll preface the review by saying that I finally got to see Gamma Ray live this summer at Wacken, and they are absolutely killer live. I was let down by the short set, but that wasn't the band’s fault at Wacken, so this album should be perfect for me.

The good news is that all four band members are spot on. I couldn’t detect a single mistake, and Kai’s vocals sounded impeccable. In fact, his singing on “Farewell” is among the best performances I’ve heard from him. If you want to hear the band live, this is definitely a good representation of them. This brings me to my issue with this album, which is the setlist. Some of the song choices were fantastic. I never imagined I’d get to hear songs like “Wings of Destiny”, “Men, Martians, and Machines”, and “Watcher In The Sky”. If you are a fan of the band’s Ralf Scheepers era, then you’ll also be pleasantly surprised. Unfortunately however, many of song choices are flat-out strange. Firstly, the band felt the need to include two of the worst songs they’ve ever done, “Money” and “Time To Break Free”. In addition, they take the two best songs they’ve ever written and turn them into acoustic songs. “Rebellion in Dreamland” was a pretty pointless endeavour because it really doesn’t change that much from the original (but the fast part loses most of its power, unfortunately). “Send Me A Sign” was actually an interesting rendition of the catchy classic, but I still would have preferred to hear the original. One final point about this record is the somewhat strange inclusion of Michael Kiske on a few songs. I know he sang on them originally, but without being able to see the video, it seems somewhat random for him to be popping up on these tracks.

When it comes down to it, this is a record for the die-hard Gamma Ray fans. I consider myself one, but “Skeletons & Majesties Live” didn’t quite do it for me. It is a fair representation of the quality of performance that the band puts on, but it also showcased the band’s writing talents at their worst. The exclusion of songs like “Man On A Mission”, “Heaven and Hell”, “Fight” is confusing, but the band seemed to go out of their way to pick songs that aren’t their best. I won’t ramble on about the merits of the setlist anymore. If you like the looks of it, buy this; if not, hold out for a better Gamma Ray setlist or find an older live album.

Be sure to check out and like Gamma Ray on Facebook!
http://www.facebook.com/gammarayofficial?fref=ts
Highlights
"Men, Martians, and Machines"
"Watcher In The Sky"
"Farewell"