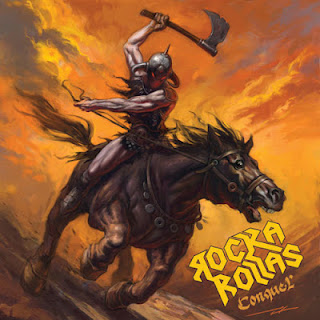 It’s 2012 and after a short “break-up” Running Wild have returned with their new EP “Conquer”. The earlier release of “Shadowmaker” was just a cruel joke; Rolf really reformed the band under the new name Rocka Rollas and decided to bring us his pirate-infused speed metal once again! Well, that’s what all Running Wild fans hoped at least. The good news is that Rocka Rollas is actually a legitimate new band that has truly captured the essence of Running Wild. Amazingly, all of this music was composed and played (except for the vocals) by just one guy. Musically, their first full-length, “The War of Steel Has Begun” was quite a different affair. It was still an over-the-top speed metal attack, but it was more of a tribute to heavy metal with tracks like “More Metal Than Steel” and “Heavy Metal Kings”. With “Conquer”, Rocka Rollas has turned their attention bringing back the glory of records like “Blazon Stone” and “Black Hand Inn”.

The opening song, “Bloodbath” is the most pirate-sounding track of the last couple of decades. Seriously, those melodies sound like they were ripped straight from Running Wild (and it isn’t because they are, it’s just that their style was so distinctive that no other band captured it until now). On the title track, the band slows down a bit in favour of a galloping approach. After a few minutes, there are a series of fantastic harmonized lead that eventually morph into guitar solos. This is actually one of the more original moments of the EP, as the band use some melodies that I can’t recall hearing on any Running Wild albums. The third track really picks up the pace again, but it actually reminds me of something from the “Death or Glory” record, where the pirate-sounds were prevalent, but not as clear as they were later on. I guess that is appropriate for a song called “Riding The Metal Storm”. The chorus of this track is actually a lot more upbeat than anything else on the album, but the intensity resumes after each chorus. “Steelwheeler”, the instrumental, is a high-speed shredding affair that is the perfect close to this release.

While it is the guitars that work quite hard to make this record sound like an authentic Running Wild album, the vocalist is actually quite similar to Rolf as well. He is certainly very German sounding and is probably the most appropriate singer for this type of album. It’s difficult for me to comprehend how Rocka Rollas can create this sound so effectively, but they’re the first band I’ve discovered. What’s more, this EP is only a teaser for the full-length, “Metal Strikes Back”, which will be released next year (also on Stormspell Records). “Conquer” is a must-buy for all fans of Running Wild, as well as for all fans of killer speed metal!