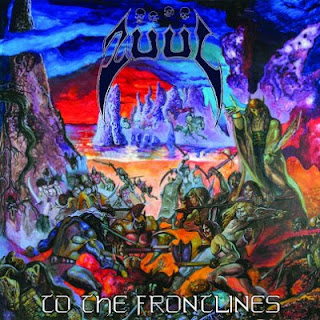 Züül joins countless other American bands on the quest to revive the glory of the heavy metal of the 80’s, and they manage to stack up quite well against their competition. One thing you’ll notice immediately on “To The Frontlines” is that Züül takes a very different approach from the other current bands of the day. The production is thinner, and far less clear than bands like White Wizzard and Enforcer, but the sound comes off as more authentic. The aforementioned bands are great, but it’s quite clear that they’re from this decade, whereas Züül’s music sounds as if it were recorded in the 80’s. This is a major plus for those of you who don’t like metal to be polished, because “To The Frontlines” is actually quite a raw heavy metal record. I’m actually reminded of great NWOBHM bands like Jaguar and Diamond Head in the sheer energy and tenacity of the vocals, riffs, and solos.

As is often the focus with newer traditional heavy metal bands, I’ll start with the singer. Vocalist Brett Batteau is one of those guys who gets by on his aggressive performance. He doesn’t have the range of Bruce Dickinson or Rob Halford, but he has the attitude of somebody like Paul Di’anno, and for this sound, it works perfectly. The guitar playing on the album is another strong point. The Maiden-like leads are prominent and there are some interesting solos; however, the band definitely does not go overboard in this respect. Züül definitely seems to prefer the old-school approach of “less is more” when it comes to guitar solos. Finally, I have to talk about the songwriting. Simply put, it’s quite inspiring. Not every song is a masterpiece, but when the band writes a great song, they knock it out of the park. The last part of the record is the perfect example. After the somber track, "Of The Fallen",  come the two epics of the album. “Bounty Hunter” is a mid-paced galloping adventure that would make Steve Harris proud. In addition, it has by far the catchiest chorus of the record. Surprisingly, it shows the singer at his most melodic at possibly any point on this album. The song slows down and gets more atmospheric in the middle before finally erupting into a high-speed number that eventually reverts to the original gallop. I won’t give you a play-by-play of the next track, but I can assure you it’s almost as epic as this one! In addition, there are a few other gems on this record: “Show No Mercy”, “Guillotine”, and “Smoldering Nights” come to mind.

Ultimately, Züül have come out with quite a unique record for the sound they are creating. If you don’t like how the bigger new bands are representing traditional heavy metal, give this album a shot. Despite what I’ve described, it isn’t musically all that different from these bands, but it is presented in an extremely unique manner. This is one band that is going to be gaining some serious momentum soon, and if they can make every track as epic as the last couple of songs, they’ll immediately jump to the forefront of metal in my mind!

Be sure to check out and like Züül on Facebook!
http://www.facebook.com/zuulheavymetal?fref=ts
Highlights
"Show No Mercy"
"Bounty Land"
"Waste of Time"