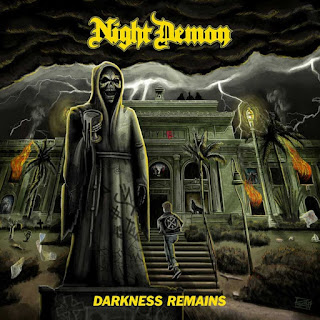 After making a huge splash in the traditional heavy metal scene with their debut album, Night Demon returns just two years later for round two: “Darkness Remains”. The band may have a new guitar player, but rest assured that little has changed musically. Night Demon still excels by delivering short, catchy tunes that bring metal back to the 1980s. Their single-axe attack means the bass playing is always front and center, particularly during guitar solos. Riffs are in no short supply, and often show homage to any number of NWOBHM or early heavy metal bands. There really aren’t any influences on this record beyond 1986, and that’s exactly the way Night Demon fans should want it.

This style of metal means that Night Demon will rise and fall based on the quality of their songwriting. “Curse of the Damned” was overflowing with great efforts, and “Darkness Remains” follows in a similar vein. The opening track, “Welcome To The Night” is an obvious winner, due largely to its energetic riffing. The band is able to seamlessly transition into bluesy guitar leads, resulting in a smooth, refined heavy metal sound. In general, this tends to be a strength of Night Demon’s: their songs flow well and move from riff to riff without any difficulty. The record doesn’t let up anytime soon either, with both “Hallowed Ground” and “Maiden Hell” rounding out the other early highlights. The tempo may decline with “Stranger In The Room”, but this song shows that Night Demon can do pretty much any heavy metal sound successfully. Though some of the following tracks stick better than other, there really are no weak points, and all of the first 8 songs show a similar rocking formula.

The band does offer some slight experimentation on “Flight of the Manticore”, which is an instrumental that kneels at the altar of “Powerslave”. Much in the way that Gruesome manages to recapture the sound of Death’s music, this particular track is the most authentic worship of the “Powerslave” record around. This song is followed by the title track closing out the album, which is a slow-burning tune featuring vocals that are drowned in some sort of filtering effect. This unleashes a potential the band displayed on the debut, which is their penchant for writing atmospheric moments that fit the band’s darker themes.

“Darkness Remains” quickly proves that it is a very worthy follow-up to “Curse of the Damned”. Which one is superior is essentially a toss-up of which set of songs click better with you, but the core formula is identical. One thing is certain: if you grew up listening to Iron Maiden and Judas Priest, Night Demon will win you over instantly! They might not have the dueling lead guitars (at least live, there are occasionally some on the record), but every other element is in tact, and played to perfection. Ultimately, it is clear that Night Demon are big fans of old-school heavy metal, but they are even better practitioners of the style!

Highlights
"Welcome To The Night"
"Maiden Hell"
"Flight of The Manticore"