Evil Force – Banging on the Pentagram 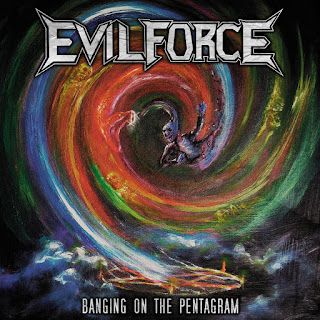 With a name like Evil Force, this Paraguay-based thrash metal band is anything but subtle. Unsurprisingly, their second full-length record, “Banging on the Pentagram”, sounds like it was unearthed from the very darkest depths of the underworld. Boasting the ever-wide variety of influences from Motorhead to Venom to Midnight, Evil Force is a black/thrash band that is possessed to take your soul with their demonic hymns. This group is faster and more aggressive than any of the aforementioned bands, but their intent is clear: to make dirty, satanic thrash metal.

The band’s enthusiasm is definitely infectious. “Banging on the Pentagram” is not exactly the best collection of songs, but it’s hard to deny how forceful the riffing is, and the authenticity of the band’s sound. The production is clear enough to hear every instrument, but retains a noisy, cavernous sound with plenty of echo. This atmosphere gels with the band’s propensity towards shouted vocals, wild guitar solos, and slightly more complex punk-influenced riffs. Sometimes the band's inspiration deviates slightly from an otherwise one-dimensional sound. “Devastation Time”, for example, opens with some early Iron Maiden-worship, while “Offering to Horus” has a riff that is very clearly an homage to Metallica’s “The Four Horsemen”.


Evil Force does not have a particularly unique sound, but they are skilled at what they do. There aren’t a lot of individual highlights on this record, aside from the painfully catchy gang shouts of “Toxic Warfare”, but it is a cohesive release that is sure to please fans of this style. “Banging on the Pentagram” may be a step or two below the works of the subgenre’s elite, but it is an admirable effort that is worth more than a few spins!

at 4:35 PM
Email ThisBlogThis!Share to TwitterShare to FacebookShare to Pinterest
Labels: 2016, Banging on the Pentagram, Evil Force, Paraguay, Thrash Metal