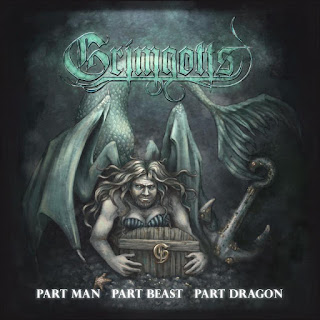 If the absurd title doesn’t give it away, “Part Man, Part Beast, Part Dragon” is the ridiculously over the top symphonic power metal release from UK band Grimgotts. Drawing influence from similarly comedic bands like Twilight Force and Alestorm, Grimgotts plays a style of music that mixes solid power metal with more light-hearted moments. Of the two aforementioned bands, they lean much more towards Twilight Force, both in sound and execution. When Grimgotts is truly rolling, such as on “Struck By Fire”, they embrace a high-flying, Rhapsody-inspired power metal sound. Though their vocalist isn’t the most operatic, he has more than enough charisma to carry the band. It might be an exaggeration to say he soars over the rolling double bass and triumphant keyboards, but he definitely isn’t struggling. This opening track is by far the highlight on an otherwise confused EP.


Where the Twilight Force comparison really hits home is in the other 4 songs on this release. Much like the Swedes, Grimgotts sometimes loses the plot when they abandon metal (or when they hang on the edge of it). The bouncy folk track “The Everlasting Kingdom” is a true head-scratcher, while “Close To Home” strays even further from metal. “The Edge of the World (The Voyage to Vale)” brings the band a bit closer back to reality, but ultimately can’t salvage the release despite a soothing, melodic chorus. The closing track, "Follow Me", is another unexciting semi-metal tune. All in all, there’s really only one worthwhile song on “Part Man, Part Beast, Part Dragon”. While it is a good track, it is one in a legion of Rhapsody clones, with the only slight differentiator being the band’s cartoony vocalist. This doesn’t make Grimgotts’ third EP completely skippable, but it won’t set the world afire. Comedy is great, but let’s keep it metal.