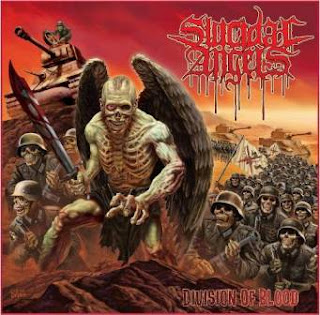 As far as newer thrash bands go, Greece’s Suicidal Angels is quickly becoming one of the most prolific groups. “Division of Blood” is the band’s 6th album in the span of a decade, and shows the group continuing their thrash onslaught with absolutely no compromise. If you enjoyed their last record (or any of the others, for that matter), this one will keep you satisfied as well. Put simply, Suicidal Angels know exactly what they’re good at, and they beat you over the head with it until it sinks in. This means “Division of Blood” is an album overflowing with riffs, each somehow more potent than the last. Even though there is little variation in the band’s general sound, nothing on this album sounds uninspired. In fact, the band has an uncanny ability to write absolutely crushing and memorable mid-paced sections (see the breakdown in the brutal opener “Capital of War”, where frontman Nick Melissourgos shouts out “fire” over and over again). Often times these riffs feature numerous gallops, which only serve to increase the rhythmic complexity of the band’s sound. These sorts of riffs are flying all over the title track, which is upbeat in nature, but not overly quick.

As great as the band is at making grooving mid-paced sections, thrash is about speed, and Suicidal Angels delivers that. In fact, this is when they’re at their best. “Image of the Serpent” is the fastest song on the record, and that naturally makes it the most enjoyable. The speeds the band reaches on this track are almost unfathomable, and the tightness of their playing (aided by the sharp production) truly adds to the experience. It isn’t just the rhythm guitars that make this album great; the band’s drummer is similarly well equipped for high tempos. He has an impressive amount of virtuosity in his ability to get around the kit and create interesting fills. There are a lot of straightforward thrash beats on this record, but more than enough variety for the drums to remain compelling. He often sounds completely out of control, yet he remains perfectly in time on every track.


One strange decision about this record is the last track, “Of Thy Shall Bring the Light”. After completing yet another competent thrash effort in a few minutes, there are several minutes of silence, followed by a short one minute outro. As with every time this has been done in the history of metal, it feels pointless. If you cut the fat on this track, you’re left with a 35-minute record that thrashes just as hard as anything else. It certainly doesn’t ruin the album, nor will it prevent me from putting it on, but it’s one of those head-scratching moments where you wonder if the label requested 40 minutes of music. Ignoring this bump in the road, “Division of Blood” is another impressive addition to the band’s legacy. If you are a fan of thrash, this record needs to be in your collection because it a pantheon of great riffs!

Highlights
"Capital of War"
"Eternally to Suffer"
"Image of the Serpent"