Farseer – Fall Before The Dawn 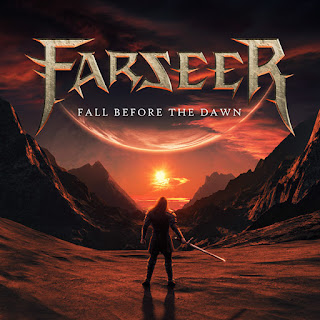 After around a decade of existence, Scotland’s Farseer recently unleashed their debut full-length, “Fall Before The Dawn”. This disc offers nearly an hour of well-executed power metal that shows plenty of incredible technical proficiency, among many other desirable traits. After a short intro, the band wastes little time before launching into “Luck of the Joker”, which is the prototypical high-speed power metal track to kick things off. It quickly becomes clear that Farseer is well versed in the ways of melodic guitars and soaring vocals, among many other common power metal traits. The record as a whole is reminiscent of a slightly less flashy version of Colorado’s Enceladus (though that might just be because of the similarities between the two bands’ singers).

Many other songs similarly display the attributes needed for good power metal. “Nightmares Collide”, for example, opens with a killer scream (and rest assured, there are more than a few high-pitched wails throughout this record). The closing song, the title track, unleashes an infectiously catchy “whoa-oh” section that will have you singing along instantly. Though the guitar playing is quite skillful all throughout the record, it shines most on a track like “Second Strike”, which features a more melodic solo near the end of the song. Farseer also isn’t afraid to get a bit heavier either. “Way of the World” opens with a super thrashy riff, and though it does have a bit of an interlude halfway through the song, it ultimately ends up being one of the more crushing tracks on this release.

There are a fair number of highlights on this record, as noted above. However, its fundamental flaw is the fact that the songs don’t have as much staying power as one would hope for from power metal. Perhaps it is the fact that I’ve been listening to excessive amounts of Avantasia recently, but there is a stark difference in the way these two bands approach choruses. While Farseer has some enjoyable melodies in their choruses, they always feel like an extension of the verses. There is no buildup to the chorus, and it doesn’t manage to be the climax of the song. Compare this with bands like Nightwish, Edguy, and the aforementioned Avantasia, where nearly every song builds into a giant chorus that sounds larger than life. Of course, power metal doesn’t need to be written this way; after all, these three cited bands are basically writing pop songs under the guise of power metal. But the point is still valid: this album is one long stream of consciousness. There is no major distinction between different sections of these songs (aside from the occasional interlude), and this makes the record feel more one-dimensional.


Despite this criticism, “Fall Before The Dawn” is a very solid record. It certainly cannot be faulted anywhere in terms of execution, as both the production and individual performances on this record are stellar. This album displays a lot of potential for the band; if the songwriting were tightened up a bit it would be easy to imagine Farseer being ranked among the better power metal bands. For now, they’re still well worth listening to, and definitely worth following into the future!

Highlights
"Luck of the Joker"
"Nightmares Collide"
"To Play the Game"

at 8:23 PM
Email ThisBlogThis!Share to TwitterShare to FacebookShare to Pinterest
Labels: 2016, Fall Before the Dawn, Farseer, Power Metal, Scotland