Godless Angel – The Conjuring of Four 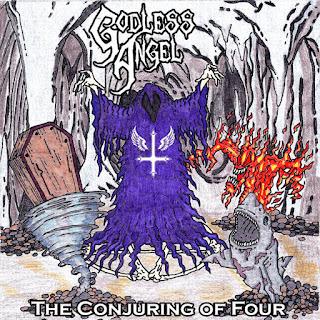 Godless Angel is the brainchild of multi-instrumentalist Derek Neibarger, and the band has just put out their 3rd full-length album (4th release total) entitled “The Conjuring of Four”. The name of this release is quite appropriate in this case, as this succinct record features four atmospheric interludes that are contrasted by four grooving death metal songs. The interludes are brief in nature, but all of them get the job done. The meat of this release consists of the four full songs, all of which are characterized by chugging, galloping death metal riffs. The release as a whole has an otherworldly feel, which is supported by the mysterious-sounding lead guitars that show up almost constantly on these four songs. Many of the moments lacking vocals feature some impressive lead playing; not so much in terms of virtuosity, but moreso in how they add to the atmosphere of the release.

Derek’s vocals are a welcome change from a lot of death metal. Rather than simply employing a grunted, guttural tone, he models his voice after Chris Reifert from Autopsy. This means that each scream aims to be more sickening than the last, creating a truly twisted death metal release. This adds a lot more emotion to the album, which is definitely appreciated because the drums do feel a bit mechanical sounding at times. “The Conjuring of Four” succeeds when it is more melodic and builds an unsettling aura, but the drums occasionally take away from this effort.


Nevertheless, “The Conjuring of Four” accomplishes what it sets out to do. My death metal tastes tend to prefer much more speed, as well as significant thrash influence, but you certainly can’t fault this album for very much. It stands out amongst a very crowded death metal field, and it is clearly an inspired work. For that alone, it is worthy of your attention, especially if you dig anything with atmosphere.

Highlights
"The Worms Are Eating Him Now"

at 6:18 PM
Email ThisBlogThis!Share to TwitterShare to FacebookShare to Pinterest
Labels: 2016, Death Metal, Godless Angel, The Conjuring of Four, USA