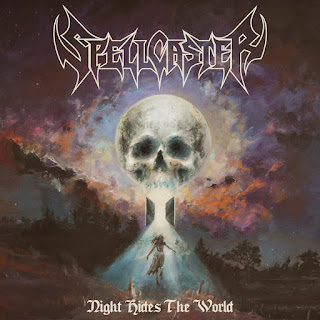 “Night Hides The World” is the third album by American heavy/speed metal band Spellcaster. This release shows serious improvement over the band’s previous record, primarily due to having much stronger songwriting. Spellcaster has long been a band that nailed things technically: good production, solid musicianship, and an overall enjoyable sound. Yet, for some reason, the end result didn’t live up to what one would expect from that description. “Night Hides The World” fixes this problem, which is immediately evident from the first three songs.

Each of “Aria”, the title track, and especially “The Lost Ones”, are filled with hooks from start to finish. A single listen to each of these tracks is all that is needed to be singing along. To call many of the melodies in these songs catchy would be an understatement. The clear highlight is “The Lost Ones”, which features the greatest guitar harmonies that Iron Maiden never wrote in its chorus. While both this track and “Aria” are a bit more upbeat at times, “Night Hides The World” kicks off with some more standard, feelgood riffing that wouldn’t be out of place on some softer metal records. Regardless of the approach taken, the tracks that kick off the album definitely slay.

After these three songs, the band settles into a less inspired version of the same sound. Nothing on the second half of the album is bad, but it falls short compared to the first three songs. While this is partly due to the songwriting, my issue is actually with the vocals. The last Spellcaster record left me a little disappointed with the vocals, but this one makes everything incredibly clear: the band’s singer has Jason Decay (Cauldron) syndrome. For those not familiar with Cauldron, Decay has one of the most laid-back voices in existence, and many metal fans consider his voice to be boring and unoffensive. I, on the other hand, think his singing is totally hypnotic, and that his voice is one of the best metal has to offer. Spellcaster’s singer, while having a more impressive range, is still in the exact same situation, with the only difference being that some of these songs use his voice better than others. When he’s on, he’s on fire (pretty much anywhere on the first 3 songs). But the other times, the vocal melodies just aren’t as effective, and you’re left with a solid heavy metal band, rather than a spectacular one.


Spellcaster has all of the potential in the world. Their second record was a disappointment because it felt like they weren’t realizing it, but “Night Hides The World” definitely shows movement in the right direction. And to be totally fair to the band, the great songs on this record stand up against any band writing heavy metal right now. The problem is one of consistency, and no doubt something that the band will likely resolve in the future. The other alternative is that this band as a whole requires an intense number of listens to appreciate, and given the aforementioned Cauldron reference, that is entirely likely. I could definitely see this album becoming a favourite a few years down the road. Nevertheless, I’m more than happy with what “Night Hides The World” has provided, and even the 5 tracks that aren’t quite as good still rock hard enough to keep the record going.

Highlights
"Aria"
"Night Hides The World"
"The Lost Ones"