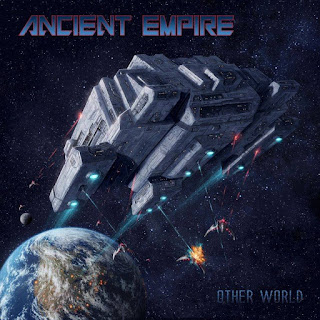 Back with their second album is California’s Ancient Empire. The artwork might be a bit of a mislead if you’re new to this band because these guys take a lot of influence from old-school sounding USPM. This album is a monolithic entity of riffs. From start to finish, “Other World” provides some of the biggest riffs in existence. The band spends a lot of time galloping and chugging, creating a driving rhythmic force all throughout the record. This sound is only amplified by the incredible vocals of Joe Liszt. I first discovered him singing for Rocka Rollas, and as great as he was there, he’s almost a better fit for this band. He has the perfect balance between a gruff voice, and one with a surprisingly wide range. While he doesn’t sound like Jorn Lande, the Norwegian singer is a good comparison because this is a rare combination of talents in a singer.

The only way that Ancient Empire can support such a heavy sound is by having a heavy rhythm section. The bass on this record is thunderous all throughout. While not delivering the most technically dazzling lines, it supports every riff, chord progression, and melody with a rumbling consistency. The drums similarly sound great, and often opt for more mid-paced beats rather than faster thrashy ones (though “Resistance” and the title track show a definite ability to thrash). This makes tracks like “Dark Before The Dawn” and “The Forsaken” even more potent in their galloping approach. There is no shortage of double bass on this album, but again, the usage is more about killer rhythms instead of pure speed.

To be fair to Ancient Empire, this album isn’t only about the rhythm playing (though it is the highlight). Most songs feature shredding guitars (which are occasionally harmonized, despite being a 1-guitar band) that will bend the mind with their wizardry. Still though, one can’t help but feel constantly bludgeoned by the quality of the riffs and the heaviness of the production and playing.


From a songwriting standpoint, “Other World” is about on par with its predecessor. There is no individual standout quite as high as “In The Killing Fields” from the previous record, but there aren’t any weak points on this album. Every song is consistently great. The general approach doesn’t vary too much, but it doesn’t really need to. Ancient Empire knows what they are good at, and they provide that for 8 songs. “Other World” might be a bit different lyrically, as the band travels the universe on this record, but it is every bit as consistent musically as the short legacy the band has built to date. This record is heavy metal with an emphasis on “heavy”!

Highlights
"Dark Before The Dawn"
"Other World"
"Empire of Man"