Necronomicon – Advent of the Human God 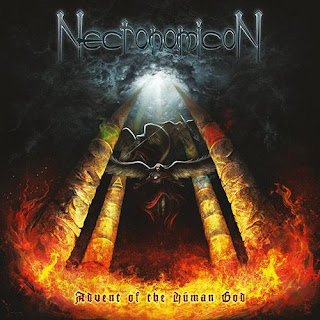 Canada’s Necronomicon is currently on their most productive pace since forming nearly 3 decades ago. Only a few years removed from the band’s previous record comes “Advent of the Human God”, which serves as my excellent introduction to the band (aside from seeing them live a couple of years ago). This release is a concise offering of incredibly precise death metal. It would be wrong to call it symphonic death metal, as these guys are considerably different from a band like Fleshgod Apocalypse, but there is definitely a pronounced symphonic element all throughout the record. Nevertheless, this does not dominate the music, as Necronomicon ensures the guitars have ample volume. Sometimes the band does get a bit carried away, such as on “Okkultis Trinity”, which is a 2.5 minute interlude designed to build atmosphere. While effective, it isn’t the only time on the record where the band does something like this, and it ends up feeling like a bit too much by the end.

Where the band shines is in their rhythm playing. Put simply, Necronomicon’s drummer is a god. There is a lot of blasting throughout this album, but the more impressive aspect of his performance is the double bass work. It is near constant, and always at a rapid-fire pace. While I would guess the drums might be triggered (simply due to the sheer consistency of their sound), it does not take away from how effortless he makes this sound. This is particularly evident on a song like “Crown of Thorns”, where the thunderous double bass overtakes even the riffs at times.


As you might imagine, the blend of spastic drumming, epic orchestrations, and numerous stellar riffs leaves room for little else. Even the vocals feel buried in the mix on this release, which is unfortunate as they’re well executed. Regardless, however, Necronomicon has some unique riffs, which makes their songs instantly memorable, even if the nature of their sound can get a bit monotonous. They do use tremolo picking, but they don't limit themselves to that technique, instead opting for different rhythms and patterns. The band’s title track, for example, features insane time signatures that will instantly confuse anyone trying to headbang along. This sort of originality is appreciated, and one of the reasons why a band like Necronomicon excels above their peers. On the whole, “Advent of the Human God” is a stellar offering of aggressive death metal with impressive symphonics.