One band I have been listening to a lot of lately is Game Over! They're currently Italy's best thrash band, and are supporting a great new record: "Crimes Against Reality". They also just finished up a wicked US tour, which I travelled to see, and so I wanted to get some insight on how the tour went and ask a few questions about the new record. Huge thanks to the guys for the interview!

Skull Fracturing Metal (SFM): Hi guys! Thanks for taking the time to do an interview. Let’s start off with the most recent tour of the US that you guys did. How did you find the response from crowds in America relative to European crowds?

Reno: Hi there and thank you very much for the space and the opportunity you're granting us.


Well, the response from crowds in America has been brilliant: we played in almost every kind of venues and people always came over supporting the show. Europe's got a lot of different types of crowds: north european people are more static, italian people are so agitated and love moshing and stagediving for the whole show, and that's why they're so close to spanish guys. 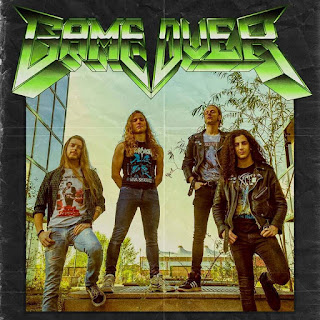 I don't know if we've just been lucky, but during our U.S. tour we always found very dedicated crowds and - and that's as precious as important for an underground band - people were so interested in merchandise and in buying original CDs directly for from the band. We're so happy, we met a lot of good guys: it's been fun!

SFM: You guys played a lot of shows in the last month, with not many days off. Was it difficult for you guys to play so many shows in a row? Have you ever toured that much in one month before?

Reno: ahah, yeah, it's been heavy but we did it! We were worried about the big amount of shows and the senseless-no-days-off-until-the-third-week, but we surprisingly survived and it wasn't such a huge deal. It's been the longest tour for us so far, so we didn't know what to expect, fearing to collapse at any moment, but it wasn't that hard, actually.

SFM: I followed you guys and Condition Critical on Facebook and noticed many of my favourite US thrash bands opening up in various cities (Insinnerator, Dawn Patrol, to name a couple). Were there any really great bands you discovered while doing this tour that you really liked?

Reno: we had the chance to play and find out a lot (and I mean A LOT) of bands and with some of them we could hang out, meeting some very cool people. We were big friends with Dawn Patrol from Memphis because their guitar player Tommy used to play with Condition Critical back in 2014, when we toured together. we played with Manic Outburst, a great speed metal band, but unfortunately it was their last show ever, and we shared the stage with the mighty Smash Potater, a super tight thrashcore band with which we played for three shows in a row and ate the best Hamburgers we've ever ate in a lifetime. We ate this UndeadElvis burger with bacon, peanut butter, bananas and a lot of other stuff and it was unbelievable.

SFM: I was at the Chicago show, and unfortunately the soundman made things a bit difficult for all of the bands playing. I was able to determine that you guys played at least the following songs: “Mountains of Madness”, “Another Dose of Thrash”, “Fabulous Disaster”, “Masters of Control”, “Neon Maniacs”, and “Dawn of the Dead”. Did you play anything different songs on this tour?

Reno: Well, I remember that show very well. The soundman himself was so disappointed and he apologized a lot for the drawback. We had a good time indeed, but i'm so sorry for all the guys who came over and couldn't hear our awful voices singing out of tune.

Yep, we played the songs you listed, that are more or less the ones who remained unchanged in the setlists, plus some more that we used to rotate day by day. We played “33 Park Street” as the opening one every night, “Astral Matter” from the latest album a couple of times, the titletrack of the same album for three or four shows and “Fix Your Brain” as well. Sometimes we rocked out with a Motorhead cover!

SFM: You guys are also supporting your new album, “Crimes Against Reality”, which is really good! This album feels a bit different from the previous two; it has some unique ideas compared to the other two albums. How did the songwriting process differ on this album?

Reno: Thank you very much man... I'm so happy you enjoyed and yes, it's been a bit risky because we did't want to make a copy of our previous album “Burst Into the Quiet”.

We just wrote and played what we wanted to, so the songwriting's been easy and “natural”, but at the same time we wanted to try something new. As usual, as soon as someone of us had a riff of something, we gathered ourselves for long periods of work on the tracks and rehearsals for checking that everything fittet the best way. We wanted everything to sound perfect, so as soon as the songs were ready, we kept on working on them for the arrangements and all the sound-mysteries we added in studio, such as moogs and hammonds. I can say that the songwriting process has been more or less the same as ever, but more methodical and, paradoxically, free.

SFM: One track that caught my attention immediately was “With All That Is Left”. I was really impressed with Reno’s ability to do more melodic singing. Is this something Game Over will do more of in the future?

Reno: Thank you very much man! The biggest part of the song you mentioned was ready for quite some time, but we wanted to devote more time to a song that's unique in Game Over's production. I'm pretty sure we'll write more power ballads or clean guitars' stuff, so people can cry tough at the shows and be disappointed for not being amused at the show. But we really had fun in writing and playing the song!

SFM: It’s no secret that Italy has a lot of great thrash bands. Who are some of your favourite thrash bands from your home country?

Reno: Yes, we have (or, maybe, we HAD) some good Thrash Metal bands, but they are not so several. I do love National Suicide. We had Final Fright too and Endovein, but they are disbanded at the moment!

SFM: Europe as a whole has a lot of metal festivals in the summer. I see you guys already have a few of them booked. Do you have any plans to do more summer festivals? 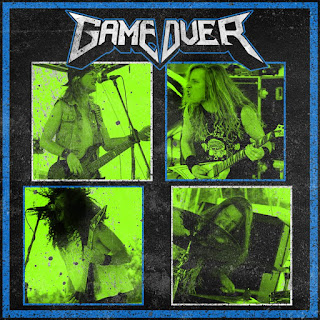 Reno: Of course, we'd like to play as many shows as we can. We have some gigs this summer with Municipal Waste, Iron Reagan, Impaled Nazarene and Exumer. Italy's so small, and its metal scene is very small as well, so it's fundamental for us to travel thousands of kilometers and play all across Europe. But that's ok, that's what we love doing!

SFM: Game Over was recently named by Trevor Strnad (The Black Dahlia Murder) as one of his 17 bands to check out in May. What does this sort of recognition mean to you guys?

Reno: Ahah, it's been amazing! I perfectly remember: we were travelling and we were in the middle of the States when Mike (bass player from Lich King and Condition Critical) told us something like: “You assholes!”, showing us his phone. It's obviously been a huge honour. Trevor looks like a super nice guy and I'd love to offer him a (ton of) beer.

That means a lot for us: we're an underground band that tries to do its best, and to be mentioned by a well known band for what we are doing is so exciting and it's a big satisfaction.

SFM: Thanks again for the interview! Any last words for the fans out there?

Reno: Thanks a lot to you for your interest and the opportunity you gave us!
We really really hope to play all across the States again because it's been one of the most beautiful things we did in our lifetime (along with the wonderful baby me and our guitar player Sanso gave birth to. It was painful).

So, kids, stay tuned, and, if you would, follow our facebook/twitter/youtube/whatelse page. But BEWARE!!! They can contain nudity and horrible HORRIBLE obscenity.

at 10:40 AM
Email ThisBlogThis!Share to TwitterShare to FacebookShare to Pinterest
Labels: Game Over, Italy, Thrash Metal