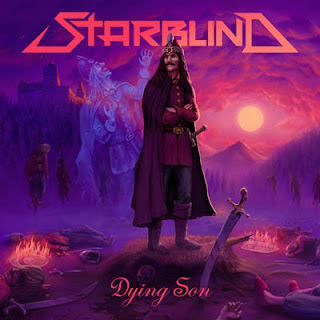 One year removed from their debut record, Sweden’s Starblind has returned with another album of Iron Maiden-inspired tunes. “Dying Son” is a step even closer to mimicking the style of the metal giants as this album’s harmonies, melodies, and riffs sound even more authentic than the last record did. Once again, the primary differentiating factor is the band’s singer, who sounds nothing like Bruce Dickinson. His approach covers a similar range, but with more grit and less clarity. This is especially obvious when he unleashes wicked screams that push the limits of his voice. While nobody can top Bruce, having a distinctive singer definitely helps Starblind to be much more than a Maiden clone. Instead, they’re more like a band that follows Iron Maiden’s old formula to create great songs.

As you might imagine, this means that the album has a lot of galloping. “Sacrifice” for example, has the trademark mid-paced rhythmic thump that Steve Harris has made a career of writing. By contrast, “Lighthouse” is a song that is built around a faster galloping charge, not unlike songs such as “Run To The Hills” or “The Trooper”. Even the drumming reminds one of Nicko McBrain’s, with its triplet ride cymbal abuse. Taking the similarities to their limits, the most noticeable throwback to Iron Maiden is in “Blood Red Skies” where the many of the rhythms are reminiscent of “Where Eagles Dare”, particularly in the rhythm section underneath the first solo.

Not to be left out in all of this worship, Starblind’s guitarists do their best to channel the spirits of Adrian Smith and Dave Murray. While there are no excessive trills such as the ones the latter guitarist loves, the way that the harmonies and solos are constructed on this record shows that Starblind’s shredders have put in the time to study the composition styles of Smith and Murray (though one of the melodies in "The Man of the Crowd" is very reminiscent of a melody from Monument's "Carry On", a band that is quite heavy on Maiden worship themselves).


“Dying Son” is not an Iron Maiden record, but it much more genuine sounding than “The Book of Souls”. This album doesn’t waste time repeating choruses 1,000 times in each song, or having too many excessive quiet intros (though “Firestone” and “Sacrifice” show that these intros are not inescapable). While it is not as good as that record, it does sound much more like any of Maiden’s classics from the 1980s. If you crave more of that sound, Starblind’s “Dying Son” is an essential listen.