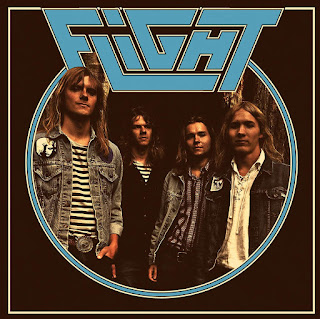 Though there has been an explosion of traditional heavy metal over the past 8 years or so, most of these acts seem concentrated in Sweden and Canada. For this reason, it is always a treat to discover a band like Flight, who hail from Norway. Their approach differs from the speed metal-infusion shredding that most of their counterparts take; instead, Flight opts for a late 1970s sound, not unlike early Judas Priest or early Riot. In fact, the band’s namesake track sounds very similar to Priest’s “Sinner”. Though this song is somewhat catchy, nearly every track that comes after it surpasses it. One great example is “Don’t Lose It”, which is an ode to harmonized guitars, as the band unleashes some of the most impressive harmonies imaginable.

As noted above, Flight is incredibly authentic when it comes to playing old-school heavy metal. The production is laid-back, and the guitars aren’t excessively distorted or downtuned. Even the vocals are relatively tame (Priest is not the best comparison in this respect, as Flight’s singer doesn’t have the same range as Halford). In addition, all of the instruments gel together (particularly noticeable in the interlude in “Flight”, amongst other places). This makes the simplistic riffs even more effective. Where Flight really shines, however, is when they unleash their shredders. Consistent with the 1970s theme, the band’s axemen aren’t going to wow anyone with the speed of their playing, but the solos are incredibly well composed. They’re often lengthy pieces, and you get the feeling that if the band wanted to abandon the rest of the song, they could carry on for 4 minutes just soloing, and the listener would still be completely enthralled (which is why the instrumental “Nightrider” is so compelling, though it has plenty of riffs too). The guitar solos are without a doubt the highlight of this record, and reason enough to buy it.


As a heavy metal record, “Flight” is not without its flaws. Simply put, it isn’t heavy enough. When Priest sounded like this, it was groundbreaking (and their songs were obviously some of the best ever written), but playing this way now would appeal more to a hard rock fan than a metal one. I’m not one to say that something needs to be heavy to be good, but it feels like Flight is on the precipice of being great, but needs a little extra push to get there. Beefing up the guitars and the production would greatly benefit the band, as it would make the riffs hit harder. Still, you can’t help but appreciate this record as something unique in the modern metal scene, and its shredding puts it leaps and bounds above what many other bands are doing.

at 11:11 AM
Email ThisBlogThis!Share to TwitterShare to FacebookShare to Pinterest
Labels: 2015, Flight, Heavy Metal, Norway