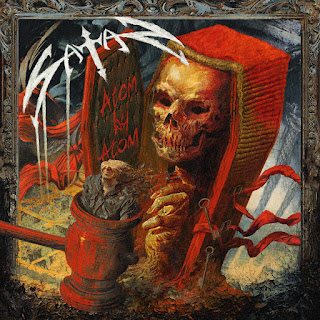 “Atom By Atom” marks the second album for the legendary NWOBHM Satan since their return a few years ago. The good news for fans of the band is that this album largely follows the path forged by their previous record. Many of the same types of melodies and rhythms that the band has used in the past appear on this record, almost to the point where “Atom By Atom” is simply an extension of the previous album.

Perhaps the biggest similarity this album has to the previous one in the production. The guitars still have that incredibly satisfying crunch that sounds distinctly like Satan (one listen to the opening riff of “Ruination” will make this incredibly clear), and they deliver a plethora of riffs and solos. Beyond the guitars, Brian Ross’ epic vocals are the other primary driver of the album. His voice is unmistakable, and he even still manages to throw in a few high-pitched screams (like the one that opens the record). The drumming is also on-point, with the tons of interesting fills, and an overall style that is a bit more laid back, giving all of the instruments room to breathe (the main riff of "My Own God" being a great example of this relaxed style).


The strange part of “Atom By Atom” is that even though the execution is spot-on, it just doesn’t have the same impact that “Life Sentence” did. Perhaps it’s because that album was far more unexpected, and especially given how authentic it managed to sound in 2013, it was a breath of fresh air. This album is more of the same, which is fine, but even the songs don’t stick quite as well. In fact, pretty much every song has a catchy chorus, and some solid riffs, but there’s nothing worth revisiting as often as songs like “Siege Mentality” or “Testimony” from the band’s last album. This album is a little more consistent quality-wise, but its highs are nowhere near as high. That doesn’t stop songs like “The Devil’s Infantry” and “Atom By Atom” from rocking incredibly hard though. It just means that this is a solid addition to their catalogue rather than a career-defining album.