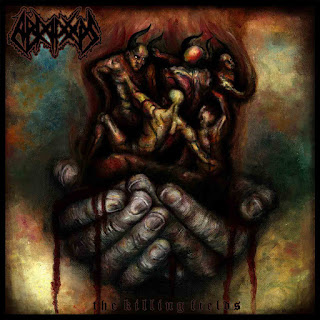 Australian thrash group Abraxxas has recently put forth their second release a little over a year after their first demo. “The Killing Fields” shows the band taking a step forward in every aspect: production, songwriting, and performance. Though it features just two tracks, “The Killing Fields” single is an impressive effort. The title track kicks things off with plenty of speed, power, and aggression. While the song has some twists and turns throughout it, much of its runtime is spent moving at full speed and thrashing everything in its path. The riffs may be somewhat standard, but they do feel more inspired than most other thrash these days. The verses in this song sync up the vocals with the riff that accompanies them, and this makes these sections especially potent, though the entire track is an immense thrasher.


The other song on this release, “Grendel”, feels a little bit more calculated. While it also can reach some impressive speeds, the first minute or so of the song is spent on slower, headbanging-inducing riffs that incorporate plenty of trills before launching into huge power chords. Later in the track, the band makes use of very twisted leads underneath the vocals, which helps to keep things interesting. Though “The Killing Fields” comes out firing on all cylinders, it is actually “Grendel” that leaves the bigger impact. Perhaps more importantly, however, this single forges a much more positive impression of the band than their already solid demo. If Abraxxas could put together a full-length of this quality, they’d shoot to the top of the modern Australian thrash scene alongside Harlott.

at 9:30 AM
Email ThisBlogThis!Share to TwitterShare to FacebookShare to Pinterest
Labels: 2015, Abraxxas, Australia, Single, The Killing Fields, Thrash Metal