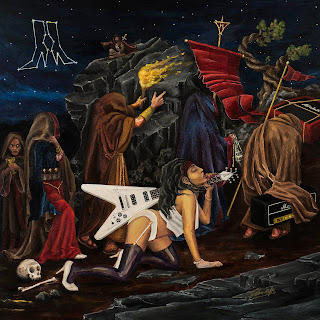 Austria is not a country that gets a lot of love when it comes to metal, but they have a surprisingly deep traditional heavy metal scene. One such example is High Heeler, who has recently signed to Swords and Chains Records for the release of their first full-length album, “Force and Finesse”. This title perfectly describes the sound of the record. The force aspect comes from the energetic, aggressive riffs that dominate the album. The album is practically overflowing with riffs that hearken back to the NWOBHM, where bands pushed the envelope as far as they could without the influence of punk. On the other hand, the finesse aspect comes from a variety of different areas. The first is the production; unlike many current traditional heavy metal albums, “Force and Finesse” does not have a modern production, and the guitar tone doesn’t have as much low end. This naturally allows the lead guitars more room to breathe, creating a bouncier, less-precise sound (though still perfectly in time).

Another area where the finesse is evident is in the vocals of the fantastically named individual, Poison Poser. His singing is somewhat of a blend between the sounds of Cauldron and Enforcer (moreso the former than the latter). He largely stays in the upper range (without hitting the highs of power metal singers), but he doesn’t provide a ton of strength in his technique. This makes his voice somewhat mesmerizing, not unlike Jason Decay’s. It also gives the album a bit of a glammy vibe at times. That is not to say they’re a full-on hair band, but anyone who appreciates those bands will definitely find even more to enjoy on this record.


From a songwriting perspective, High Heeler is above many of their contemporaries. The entire record is quite consistent in terms of quality, but a couple of tracks stand above the rest. The first is “Au Revoir”, which excels due to Poison Poser’s strong vocal performance. The chorus is catchier than anything else on the record. “Au Revoir” also features tons of lead playing, and while it is not as flashy as something from a White Wizzard record, for example, it is equally tasteful. The other standout song is “Midnight Angel”, which is notable for the incredible riff that kicks off the track. It’s one of those “feelgood” metal riffs; not particularly heavy, but very effective. The remaining 7 songs offer up similar sounds, and ultimately make “Force and Finesse” a very enjoyable release. Though it has taken High Heeler a while to release their first studio album (having been around since 2000), they are sure to make an immediate impact in the metal scene!