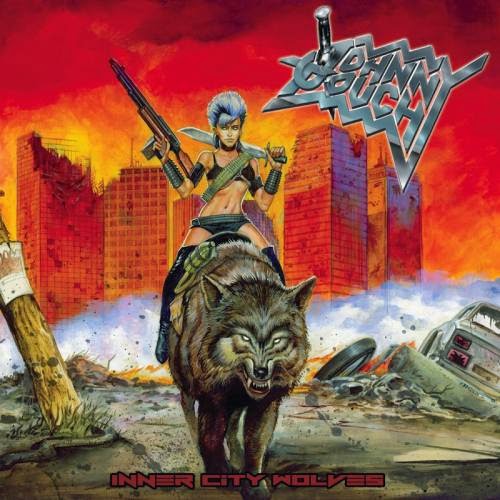 If you couldn't tell from the name of the band or the artwork on the cover, Johnny Touch play heavy metal in an incredibly old-school vein. "Inner City Wolves" delivers a dosage of metal in its least extreme form and does so brilliantly. The music here is good. Damn good. So frequently, bands that play (I hate the word,too) retro-heavy metal are mediocre to terrible, but this Aussie quartet (featuring members of Stargazer, Cauldron Black Ram and Oath of Damnation) has managed to craft some refreshing material that clearly emulates the past greats, all while forging their own style. If this wasn't the case, a reputable label like Shadow Kingdom Records wouldn't put their name on it, and many people outside of the land down under would remain ignorant to one of the continent's finest metal bands.

The reason that the music on "Inner City Wolves" is so refreshing is because when a band that plays this style of metal these days puts out a recording, it usually lacks anything remotely memorable and I find myself switching to "insert Swedish band here" instead, but that doesn't occur with Johnny Touch. These guys deliver with their rendition of metal that brings to mind past greats like Savatage, when Jamie Whyte is effortlessly shredding on "Lady Stutter," while Pahl Hodgson brings his golden pipes to sound off along the heavy riffage. Their ability to transition between acoustic passages and distorted moments on the epic "Black Company" remind me a bit of Sanctuary, who were excellent at using a more somber acoustic sound, accompanied with a heavy rhythm guitar. The comparisons to other bands isn't something that takes away from the quality of the music, as it actually highlights just how good they are at songwriting. Instead of wanting to listen to the great band who I hear in their sound, I'm drawn in to what Johnny Touch is making because the songs are killer.

There aren't many weak moments throughout this record, which can mostly be attributed to every member of the band doing a solid to stellar job. The bass thumps along throughout, providing the necessary heaviness when needed, or providing solid fills during the acoustic sections, and the drumming is consistent for every song. Still, the real highlights are the lead guitar work and the vocals. The 3-minute shred-fest that is "Radiation Axeposure" should be enough to adequately show off how good Whyte is with the ax, but his solos on every track are top-notch and would make classic shredders like Criss Oliva (RIP) and David Chastain proud. Hodgon's range is off the hook, as his vocals soar on "Lady Stutter" and "It's Alright," and then descend to a much cleaner tone (and slower pace) on "End of Daze." "Inner City Wolves" is the product of talented musicians with good taste and mighty fine songwriting skills, which is pretty much the formula for a memorable and worthwhile release. If you find yourself wanting to listen to something other than the strange, occult heavy metal from Sweden, or the dozens of Maiden/Priest ripoffs, Johnny Touch has the cure for what ails you.