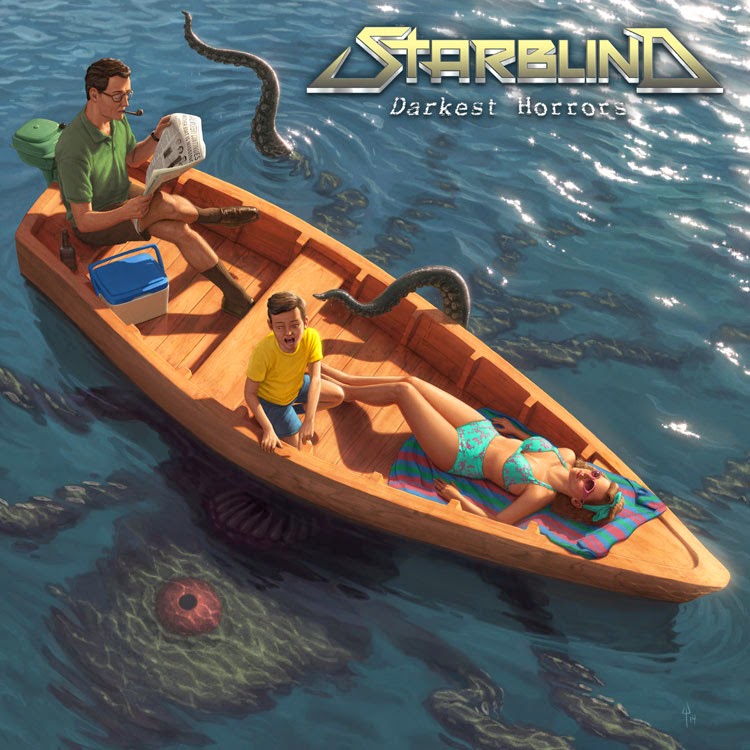 From the metal wonderland of Sweden comes a new traditional heavy metal band: Starblind. Their primary influence appears to be Iron Maiden, but the band does manage to have their own sound on “Darkest Horrors”, their debut album. Starblind features an incredible wailer on vocals, who really drives most of the record. There is a moment on “Crystal Tears” where he gets a bit out of control, but for the most part, he’s got a great command of his voice. You’ll see this throughout the album, as it’s a very hooky record, with a number of tracks that are likely to be stuck in your head when it’s over. Surprisingly, however, the hooks are just as prevalent in the guitars as they are in the vocals. For example, the opener, “Ascendancy”, kicks off with a wicked dual-lead guitar melody. Meanwhile, the chorus of the title track proves to integrate harmonies a bit more subtly, but to equal effect.

A couple of the other prime examples of the catchiness of the guitars comes from the Maiden worship. “I Stand Alone” goes full on “Fear of the Dark” with its main riff. While not completely identical, it has a very similar feel that will stick with you. Likewise, “The Reckoning” manages to capture the essence of “Still Life” (possibly the most underrated Maiden song) in the verse riff, before unleashing some harmonies that are reminiscent of "To Tame A Land". As you might imagine, harmonies are rampant on “Darkest Horrors”. This is great because the harmonies are killer, but also because it allows the bass to step forward. In general, the bass on this record is not buried at any point, but it does stand out when the guitars are soaring.


In terms of pacing, most of the record is pretty similar. The band never gets too fast, but things are usually upbeat. The chorus of “Blood In The Night” shows some decent double bass work that amps up the energy, but not necessarily the speed of the album. When the band does slow down, such as on the first half of “Crystal Tears”, the result is brilliant.  The intro of this song just screams Maiden with the way the clean guitars are used (a similar thing occurs on “The Reckoning”). Relative to some of the other Maiden moments on this record, however, this part of the song never feels like it’s borrowing from any particular Iron Maiden track. Of course, a “Powerslave”-esque harmony does show up after the guitar solos, but again, it doesn’t feel like Starblind is being unoriginal. Rest assured, despite the number of times the legends of metal were mentioned in this review, Starblind is very much their own band. “Darkest Horrors” is very much a unique experience; it just happens to draw plenty of influence from the greatest metal band of all time.