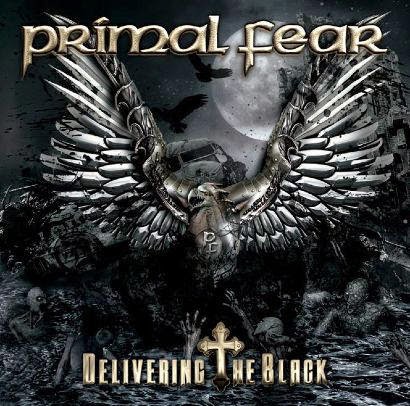 Hot off the success of “Unbreakable”, Primal Fear has returned just a couple of years later with “Delivering The Black”. The band’s formula of Judas Priest/Accept worship mixed with power metal is incredibly potent. The image of a giant eagle adorning each album cover couldn’t be more appropriate, as Primal Fear consistently present music so fierce and epic that each track feels as though you’re riding an eagle into battle, particularly when Ralf Scheepers unleashes some of his higher notes.

“Delivering The Black” picks up exactly where the last record left off. It has plenty of energetic, upbeat riff-laden tracks, such as the opening duo of “King For A Day” and “Rebel Faction”. This latter track shows the band at their thrashiest, and they put up riffs that would compete with many new school thrashers. Seriously, this track is a kick in the face that is a bit unexpected, but somehow entirely appropriate for the record. These speedy riffs are accented by the fantastic production, which is incredibly thick and powerful. The main riff of “When Death Comes Knocking” best displays this guitar crunch. And speaking of this great track, what will keep you coming back to this album is the band’s unbelievable ability to write a mid-paced lengthy epic. Both “When Death Comes Knocking” and “One Night In December” fill this role on this offering, and they both showcase Scheepers’ incredible vocal talents. His skill has never been in question, but it’s amazing how well he delivers album after album of quality performance. Further, the lone ballad, “Born With A Broken Heart” shows that has more than that balls out Painkiller-esque screaming in him. Of course, that’s a huge part of what makes Primal Fear great, but hearing the control he shows in his voice on this ballad adds some nice variety on a lengthy record.

Beyond the brilliance of Scheepers, “Delivering The Black” still has a lot else to offer. Guitarists Magnus Karlsson and Alex Beyrodt deliver some fantastic guitar solos. The aforementioned single, “When Death Comes Knocking”, has a section where these shredders unite into a harmony that would make Iron Maiden proud. By the end of the track, they unleash a magnificent guitar solo that really completes the song. The rhythm section of the legendary Mat Sinner and Randy Black don’t stand out in the sense that they’re overly technical, but they get the job done. The opening of “Alive and on Fire” shows them lock into a groove that drives the entire track. Amazingly, despite all of the praise I have heaped onto “Delivering The Black”, I haven’t even brought up one of the absolute highlights: “Road To Asylum”. No power metal fan needs more proof that a great chorus can make a song, but “Road To Asylum” is yet another track that will deliver just that.


“Delivering The Black” is exactly what every Primal Fear fan should want at this point. It’s a great representation of their sound and is a lot of fun. The only criticism I have (as always) is that the album is a couple of tracks too long. At this point in their career, however, Primal Fear has pretty well set their course, and it seems clear they have no intention of changing it. When a band is this dedicated to their craft and this good, complaining about an extra track or two seems silly. Instead, pick up the album, headbang along, and scream out every insanely catchy chorus on this masterpiece!