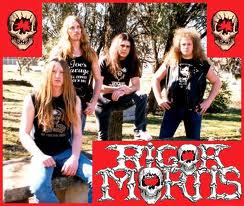 Hello all again, I'm back with another interview, this time with the frontman of Texas Thrashing legends, Rigor Mortis as well as Warbeast. In this interview Bruce talks about the future plans of Rigor Mortis and some of their biggest influences. Anyway I hope you all enjoy.

SFM - I figured we could just get straight into the interview if you don't mind. Since 2005 I believe, you and the rest of the gang decided to reunite Rigor Mortis for some shows and if I'm not mistaken you're going to be working on a new album, which will be the first album to have new material since Rigor Mortis vs The Earth back in 1991. Can you give us any insight on what this album will sound like?

BC: Yeah man, we just recorded the music for the 1st two new songs and I am going to do my vocals next week. We are letting some of record labels that are interested hear a couple of songs. Hopefully then we can sign a deal before we go in to record the entire album. If not, we will just release it ourselves.
Anyway, this album will be different… just like the 3 previous releases were all different from each other. Rigor Mortis had a very distinctive sound back then. But every album was still unique in its own way. We don’t want to just imitate something we have already done. You may hear some parts that remind you of something from all 3 of those releases. But it will also have some diverse sounding parts that are nothing like anything we have released before.

These first 2 songs are called "Blood Bath" and The Infected". The titles and subjects fit that classic Rigor tradition. Blood Bath is about serial killers. The Infected is about Zombies and inspired by the movies 28 Days Later and 28 Weeks Later.

This album is going to sound like what Rigor Mortis should sound like in 2011. All the years of experience has made us all better and more experienced musicians. I love how we are mixing our classic speed metal style with some different paced sections and adding some melodic parts. This still sounds like Rigor ‘Fucking’ Mortis… and that means it doesn’t sound like any other band in the World. That is the FACT that I am the most proud of!
SFM - Well it's good to hear you guys are sticking to your sound and playing what you want and not following any trends. Are there any possibilities of a Rigor Mortis tour?
BC - Fuck yes there will be tours! This time Rigor Mortis is serious about doing it the right way. So we plan on hitting the road as much as possible after we release the new album. We are especially going to concentrate on trying to tour Europe for the first time. We already have label interest, a good booking agency and PR people ready to get behind us.

SFM - Well I'm looking forward to it, let's hope for a Los Angeles date! What are some of your guys' major influences musically?

BC - Well I can’t speak for every member of Rigor Mortis… because we do have different influences. Naturally the classic metal bands like Sabbath, Priest, Maiden, Motorhead, Slayer etc were an influence on all of us. Casey and Harden had some punk influences too. Mike Scaccia had many guitarist influences going back to when he was really young… like Les Paul, Chuck Berry, Hendrix, Michael Schenker, Joe Perry, Randy Rhoads etc. I grew up on The Beatles as a kid in the 60s. In the 70s it was Aerosmith that made me want to be in a band. In the 80s it was Iron Maiden that influenced me the most.

SFM - Are you a fan of any of the newer thrash bands? If so which ones and what tips do you have for them if any?

BC - Yes I am, I like bands like Toxic Holocaust, Warbringer, Avenger Of Blood and Municipal Waste. Man, I made so many mistakes I don’t know if I am anyone that should be giving advice. Some of these bands have already accomplished more than I have. So maybe they should be giving me some advice… haha!

SFM - Was there any kind of competition between the older Texas thrash bands back in the day? You guys had a really good scene with bands like yourself, Gammacide, Morbid Scream, Devestation, Rotting Corpse, and Plague Allegiance.

BC - Not as far as Rigor Mortis goes. I mean we already thought we were the best band in Dallas/Ft. Worth. I hope those bands thought the same way. Plus we were the biggest band in our area during the time I was in Rigor Mortis back then. So we never thought about trying to compete with the other local underground bands. We just wanted to kickass for our fans and get our band known worldwide. We didn’t give a shit about being the kings of Dallas/Ft. Worth or Texas. So we were never like… "Ok guys, we are playing with Gammacide tonight, we got to really try hard to blow them off the stage." That shit never crossed our minds. I do know some of the other bands might have thought of it like a competition…. but not Rigor Mortis. We liked and supported most of the bands you mentioned and many other bands from that era.

SFM - Well I want to thank you again for your time, do you have any words for your fans?

BC - I just have to thank all of them for the many years of support. I know it’s been a very long wait for them since we recorded a new Rigor Mortis album. But it’s finally happening. Just give it fair a chance when the album comes out. I always notice when an older band puts out something new, people judge it after listening to it once. They say they like the older albums better. Well they’ve listened to those old albums 1000 times and the songs are embedded into their brains. So it’s harder to like something just as much after hearing it once. I’m proud of these new songs and I am confident that Rigor Mortis fans will not be disappointed. I can’t wait to tour the World playing this new material… along with the classics of course. Cheers! 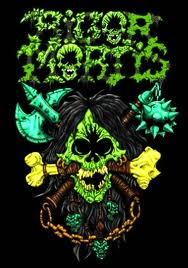