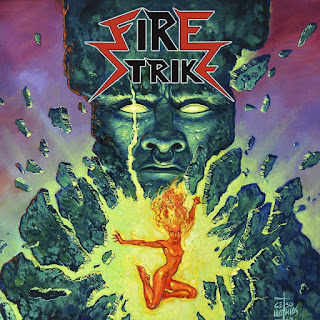 “Slaves of Fate” is the long-awaited debut album from Brazilian heavy metal group Fire Strike. Though they’ve been around for a while, it felt like the band really burst onto the scene in 2013 with their EP “Lion and Tiger”. It didn’t seem like the band quite got the attention they deserved, but hopefully that will all change now with a full album courtesy of Stormspell Records. For those new to the band, Fire Strike is a serious gust of energy featuring all things heavy metal. This band lives and breathes traditional heavy metal. Their music always feels like it is charging ahead, with no shortage of awesome riffs, tasty licks, or balls-out vocals.

The band is most notable for their passionate, fiery singer, Alina Nunes. Her voice soars atop the music in an effort to replicate idols like Bruce Dickinson or Rob Halford. While Alina’s voice obviously differs from those two, her enthusiasm is similar. She has an incredible range, but more importantly, incredible control of her voice. A lot of modern singers can wail over anything, but don’t always choose the right notes or melodies. That isn’t the case here, because pretty much every song is filled to the brim with singalong moments.

Of course, you’ll be singing along to much more than just the vocals. Fire Strike has taken a page out of the books of the two most godly metal bands (Iron Maiden and Judas Priest) and unleashed an impressive number of harmonized guitar licks. Between the two, Fire Strike leans definitively more towards the Iron Maiden side of things, particularly on tracks like “Master of the Seas”, where the thumping bass is just too prominent to ignore. It helps that the band quickly settles into a galloping pace that would bring a tear to Steve Harris’ eye.


Since Fire Strike clearly wears their influences on their sleeves, this doesn’t leave much room for originality. There certainly is nothing on “Slaves of Fate” that will shock you, but the band is able to put their own stamp on these songs. You will definitely recognize a Fire Strike song as soon as you hear it, largely due to the sheer energy with which the band plays. This is especially clear on a track like “Losing Control”, which explodes in each subsequent chorus after a ballad-esque start. This song is the clear favourite, but others like “Reach For Your Life” and “Our Shout Is Heavy Metal” are strong contenders as well. After 45 minutes of pure metal, the band closes with heartfelt shouts of “We’re living heavy metal” and “Our noise is: heavy metal”, amongst others. Lines like that truly sum up what Fire Strike is all about, and “Slaves of Fate” is an excellent record to communicate that message to the world!