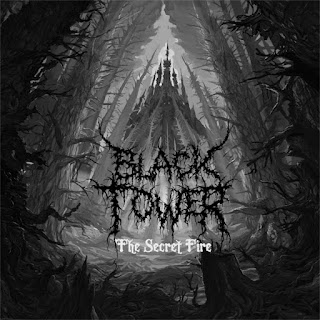 Canada is home to all sorts of fantastic unique and interesting bands, and one of Unspeakable Axe Records’ newest signings, Black Tower, is no exception. I often like to compare bands to other groups or label them pretty rigidly with genres because it makes it easier to get an idea of what they sound like, but that just won’t work with Black Tower. Put simply, their sound incorporates a variety of influences, which are both internal and external to metal. At its core, “The Secret Fire” is somewhat of a traditional heavy metal/speed metal album that has heavy leanings towards punk, all while throwing in black metal sounds. Although the album itself feels like a cohesive experience, the band jumps all over the map, many times within the same track. The first song, for example, opens with an awesome thrashy riff before devolving into something a bit less heavy. Later on, however, Black Tower’s vocalist seamlessly adds incredibly raspy black metal shrieks alongside her normal more punk-influenced voice.

It is worth pointing out that the singing on this album wild. The primary vocalist is Erin Ewing, but there are songs and sections with male vocals in them as well. Put quite bluntly, Erin’s singing takes a bit of getting used to. The harsh vocals are executed to perfection, but the cleans sometimes feel like they don’t necessarily fit with the rest of the music that’s going on. Perhaps a better description would be to say that she isn’t exactly virtuosic. This is one of the primary areas where punk fans will really dig this record, as it isn’t necessarily a bad thing, just something that differs from more standard metal albums.

A couple of the tracks on “The Secret Fire” are deserving of special mention. The first of these is “Black Moon”, which is as close as the band gets to any of the newer traditional heavy metal bands out there like Striker or Enforcer. This song’s chorus is the highlight of the album, as it is exceptionally catchy. The other track that stands out is “Shadows”. As mentioned earlier, black metal influences are prominent all throughout the album, but this song takes it to the extreme. It is not afraid to mix in blast beats, weird dissonant riffs, and of course, shrieking vocals.


Overall, “The Secret Fire” is a very eclectic release. There is no one band that Black Tower could be compared to, which makes this album a refreshing listen. Admittedly, if you don’t like either punk or black metal, the album may be hard to enjoy. These elements are pervasive within the songs rather than being isolated to a particular track or two, so it’s not something you could just skip over. Nevertheless, what is presented on this album is done so skillfully, and is another testament to Unspeakable Axe Records’ ability to find unique bands that put interesting spins on familiar styles.